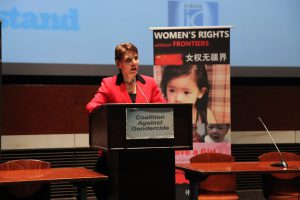 Reggie Littlejohn condemns gendercide at the U.S. Capitol Hill screening of the "It's a Girl" film

Washington, D.C. Women’s Rights Without Frontiers partnered with Congressman Chris Smith (R-NJ), Congressman Jim Moran (D-VA), Congressman Mark Meadows (R-NC), and the Coalition Against Gendercide in a bipartisan screening of the “It’s a Girl” film at the United States Capitol Visitors Center, in conjunction with the Tom Lantos Commission on Human Rights. Shot on location in India and China, “It’s a Girl” exposes the fact that there are up to 200 million women missing in the world today due to gendercide.

Reggie Littlejohn emphasized the connection between gendercide and forced abortion:

“Forced abortion is not a choice. More often than not, gendercide is not a choice either. There is a strong correlation between sex-selective abortion and coercion. Crushing social, economic, political and personal pressures in cultures with a strong son preference trample women carrying girls. All too often, women in these cultures do not “select” their daughters for abortion. They are forced.”

Littlejohn also highlighted the hope offered by WRWF’s “Save a Girl” Campaign in rural China: “We are stopping gendercide, one baby girl at a time. We have field workers in China who reach out to women who have had an ultrasound, learned that they are pregnant with a girl, and are planning to abort or abandon her. A field worker will visit that woman and say, ‘Don’t abort your baby just because she’s a girl. She’s a precious daughter. We will give you a monthly stipend for a year, to help you support her.’ The practical support we offer empowers these women to keep their daughters.”

WRWF’s “Save a Girl” is the official “It’s a Girl” film’s action campaign for China.

Learn more about the Save a Girl Campaign here: 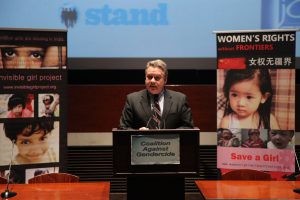 Cong. Chris Smith states that gendercide is a "crime against women" at the U.S. Capitol Hill screening of "It's a Girl"

Rep. Chris Smith stated, “Gendercide is a crime against women, a gender crime that has no parallel or precedent in all of human history.” Rep. Smith has held dozens of Congressional hearings on Chinese human rights, particularly forced abortion under the One Child Policy.

Rep. Moran continued, “To the extent that we stand by the sidelines and don’t do anything about [gendercide] makes us culpable as well.”

“We talk about wanting to find more common ground in Washington DC,” added Rep. Meadows. “And this is an issue where Democrats and Republicans can absolutely agree. Gendercide must be stopped.”

Littlejohn and the “It’s a Girl” filmmakers also collaborated in screening the film around the world, including the British Parliament, the European Parliament and the United Nations.

Donate to the “Save a Girl” campaign:

Learn more about the “It’s a Girl” film and watch the 3-minute trailer:

This entry was posted in Chris Smith, Forced Abortion, gendercide, Reggie Littlejohn, Save a Girl, Uncategorized. Bookmark the permalink.