Posted on January 26, 2018 by Reggie Littlejohn 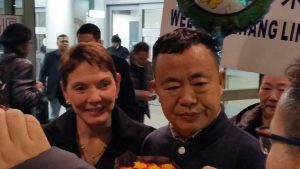 NEW YORK. Veteran Chinese activist, Zhang Lin, will arrive in New York this afternoon, according to Reggie Littlejohn, President of Women’s Rights Without Frontiers. Littlejohn and her husband, Robert, have been raising Zhang Lin’s younger daughter, Anni (age 15), since September 2013, and welcomed his older daughter, Ruli (age 23), into their home for about eighteen months to help her transition to life in the United States. Littlejohn worked tirelessly to bring Anni and Ruli to the United States, and has done the same for their father as well.

Littlejohn stated, “Zhang Lin is a brave hero who has sacrificed deeply on behalf of human rights in China. I am overjoyed that he will be able to hug his precious daughters tomorrow. He will be so proud of them. Anni was just a ten-year-old child when Zhang Lin last saw her. Now, she is fifteen and a lovely young woman. She speaks perfect English, is a straight-A student, and performed piano in Carnegie Hall in 2016. Meanwhile, Ruli has a great job and has earned her real estate license. Meanwhile, she is going to school part time to earn a degree in accounting. Both Anni and Ruli are active members of our Church. They have made a brilliant transition to life in the United States. My husband and I feel it has been a privilege to be their American father and mother.”

Concerning her father’s arrival, Anni said, “I can’t believe this is happening. I’ve been waiting for this day for four years!”

Zhang Lin has been detained several times for a total of sixteen years for his pro-democracy advocacy in China. At age 10, his daughter, Anni, was taken out of her fourth grade classroom and detained overnight. She was not allowed to attend school and she and her father were placed under house arrest. She is known as “China’s youngest prisoner of conscience.”

Littlejohn continued, “I would like to thank John Kamm, president of the Dui Hua Foundation, for his decades of advocacy on behalf of Zhang Lin. I would also like to thank Jing Zhang, president of Women’s Rights in China, and activist Yao Cheng, for all their help on behalf of Zhang Lin. Congressman Chris Smith was instrumental in helping Anni and her sister come to the United States. All of them laid the groundwork for this happy day.”