Celebrate New Life By Helping Save Girls in China 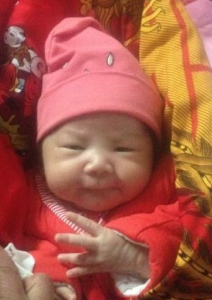 This is “Huiqing,” a one month old baby girl, born in a remote village in China.  Who wouldn’t love this adorable baby?  We hope she will never know the firestorm of controversy that her birth brought to her family – all because she was conceived without a “Birth Permit” — and then born, not a boy, but a girl.

You see, Huiqing was conceived under China’s brutal One Child Policy.  She has an older brother, so her family was not allowed to have another child.  Her parents did not have a “birth permit” for her.  She was an “illegal child,” subject to forced abortion.  Her parents thought she was a boy, and so bribed the village leader not to report their illegal pregnancy to the Family Planning Police.

Then, China announced its new “Two Child Policy,” so Huiqing’s parents thought they were safe.  But in many areas, children conceived under the One Child Policy were not grandfathered in under the Two Child Policy.  They remain illegal!

After Huiqing was born, out of the blue, Family Planning Police arrived at the home of her parents and ordered her mother to be sterilized.  Under the Two Child Policy, women are routinely sterilized after their second child – to prevent them from having a third child.  These forced sterilizations are not carried out by highly trained gynecological surgeons.  People with very little training often butcher women in the remote villages.

Huiqing’s father wanted another son.  If Huiqing’s mother were sterilized, this would be impossible.  So Huiquing’s father began to pressure her mother to “give her away” to avoid the sterilization.  This sometimes means finding a childless couple to adopt her.  It sometimes means leaving her in a field to die.

Huiqing’s brave mother would not accept the pressure from her husband or the Chinese government.  She wanted desperately to keep her daughter, who brought her much happiness.  But she did not know what to do or where to turn.

It is such an honor to help brave women like Huiqing’s mother!  And you have a unique opportunity to help as well!

Won’t you help us save more girls like Huiqing?   We have saved hundreds of girls, and yet there are millions more who are being aborted or abandoned just because they are girls. Some baby girls are born to families so poor that their health is at risk.  Each one of these girls is infinitely precious.  Please help us save them by donating to our “Save a Girl” Campaign.

Learn more about how you can help to save girls here: http://womensrightswithoutfrontiers.org/index.php?nav=give

You can give a one-time donation in any amount.  Or $25 per month, or $300 per year, our GirlSavers have helped WRWF save at-risk babies in China, babies like Huiqing, who would likely not be alive if one of our undercover fieldworkers had not met her mother and assured her that little girls are as special as boys. We put our money where our mouth is, offering practical assistance to empower these mothers to keep their daughters.