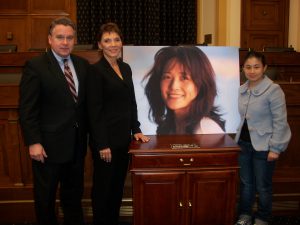 Rep. Chris Smith, Reggie Littlejohn and Wang Xuezhen surround a photo of Pearl /He Peirong after the Congressional hearing of May 3

He Peirong, known as Pearl, has been released from detention and has been interviewed by the BBC.  Pearl has become known as the rescuer of blind activist Chen Guangcheng, having driven the car that brought him from Dongshigu village to Beijing.

Reggie Littlejohn, President of Women’s Rights Without Frontiers, has been advocting for Pearl’s release.  Littlejohn testified about Pearl at a hearing before the Congressional-Executive Commission on China yesterday, and Rep. Chris Smith took up Pearl’s cause.  Littlejohn stated, “I am relieved and delighted that Pearl has been released – the day after the Congressional hearing at which her case was so strongly raised.  Some say that quiet, back door diplomacy is the way to deal with the detention of Chinese human rights defenders.  But human rights activists have found that high profile, public pressure is far more effective.”

Pearl herself seems to have endorsed this approach in the BBC interview earlier today.   According to this interview, she was confined to a hotel room.  The police were “polite,” but persistent in their effort to obtain information, which Pearl did not divulge.  About her own safety, she said, “I was very concerned, but once the thing went public, I was no longer worried.”  http://audioboo.fm/boos/785812-he-peirong-describes-chen-escape?utm_campaign=detailpage&utm_content=retweet&utm_medium=social&utm_source=twitter

Testifying with Littlejohn was Wang Xuezhen, who said that she was one of the netizens who tried to visit Chen.  She was beaten and strip searched, but said that others were treated far more brutally than she.

This entry was posted in Chen Guangcheng, He Peirong, Uncategorized. Bookmark the permalink.