China: Activist Detained, Tried for Defending the Right of his Ten-Year-Old Daughter to Go to School (Including Translation of Zhang Lin’s Final Testimony)

Posted on December 20, 2013 by Reggie Littlejohn 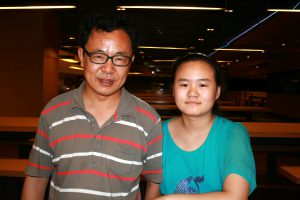 ANHUI, CHINA. Veteran pro-democracy activist Zhang Lin has been imprisoned because he defended the right of his ten-year-old daughter, Zhang Anni, to go to school. His trial was December 18.

Anni was forcibly removed from the Hupo Elementary School by four unidentified men and detained without food or water for several hours. Anni had to leave China to get an education. She and her sister and Zhang Ruli were able to come to the United States and are being cared for by president of Women’s Rights Without Frontiers Reggie Littlejohn and her husband, Robert, who have welcomed the young refugees into their family. Anni now attends school in San Jose, California. http://www.womensrightswithoutfrontiers.org/blog/?p=1438

Women’s Rights Without Frontiers obtained an exclusive interview with an eyewitness to the trial of Zhang Lin. This witness must remain anonymous, for security reasons. The witness stated that the courtroom was packed – perhaps 100 to 200 people were present. Also, many were turned away. There were hundreds of armed policemen outside the courtroom. According to the eyewitness, Zhang Lin did not look healthy. His skin looked thin and very yellow. He wept while delivering his Final Testimony, especially the parts about the abuse suffered by his daughter Anni, at the hands of governmental authorities.

Reggie Littlejohn stated, “Anni has gone from being “China’s youngest prisoner of conscience” to being “China’s youngest political exile.” I am dismayed by the Chinese government’s persecution of this innocent 10-year-old girl, because of the peaceful pro-democracy advocacy of her father. Zhang Lin is a hero. He has sacrificed everything for human rights and freedom in China. We are very concerned about his health, especially the recent report that his skin appeared yellow, raising the possibility that he may be suffering from jaundice. His daughters miss him daily. We are also concerned about former Navy Lieutenant Colonel Yao Cheng (Tan Chunsheng) and writer Li Hua-Ping from Shanghai, both of whom also have been detained for helping Anni. Women’s Rights Without Frontiers urges the Chinese government immediately to release these three brave and innocent men.”

Here is the English translation of Zhang Lin’s Final Testimony. The original Chinese Testimony can be found here: http://www.womensrightswithoutfrontiers.org/blog/?p=1463

Your Honor and My Audience:

Three years ago when I became divorced, I lost my house in Bengbu City, and I was raising my two children alone. Fortunately, my friend Yao Cheng had an empty house in Hu Po Shan Zhuang in Hefei City. It was only a street away from where my elder daughter went to college, the Agricultural University of Anhui Province. On January 1st of this year, I moved there with my younger daughter.

I examined approximately five elementary schools around my house, and found that only Hu Po elementary school (West district) is a normal elementary school that was built to match the local community. It had difficulties attracting students, and had only twenty plus students in each class. As long as one had an “electronic school roll” and paid a small sponsorship fee to the school, he/she could transfer into it. I fulfilled all the formalities that I needed to do. Anni (my daughter) registered for admission on February 24th to this school. She started class on February 25th [2013].

Unfortunately, two days later, Anni was taken away by four unidentified men, while she was attending school, and in front of all the teachers and students. My poor 10-year-old girl was detained alone in a room in Hu Po police office, under guard. Anni lost her freedom and could not go home.

Then the school principle of Hu Po elementary told me and my daughter in person, that out of fear and worry, he sent three teachers to follow the men who took Anni, but the teachers lost track of them eventually.

A 10-year-old girl was taken away, and was detained and interrogated alone. As a father, I was not notified. Her elder sister, who was anxiously waiting for Anni to go home, wasn’t notified either.

Only after 7:00 p.m. that night was I able to see Anni. At this time the vice-captain of Bengbu branch of National Security Bureau told us, “you may now go home.”  My daughter and I thought that we regained our freedom,  but when we were going downstairs, we were blocked with violence by the HeFei National Security guards. Among them was a guard named Wang Jie (handwriting of the first name unclear). Anni was forcefully stopped several times at the entrance to the staircase.

The stalemate lasted till about 8:00 p.m. At this time an event that deeply saddened me happened: a plainclothes man with a ferocious appearance suddenly held Anni’s arms and dragged her away forcefully. I was stunned. It was hard for me to believe such unbridled brutality was done to a 10-year-old girl, and it was in front of her father! At that moment, I felt even my breath stopped and my whole body froze.

I was deeply troubled, not to mention my daughter Anni, who was only10 years old. From then on, her mental state was not very stable, and was filled with fear and anger to strangers.

A little more than a month after Anni was forced out from school, on April 7th, to my surprise, a group of lawyers and internet friends with a sense of justice came to Bengbu City. They sent me and my daughter back to Hefei City, and tried to let Anni return to her school.

During our stay in Hefei City, I was mainly expressing my appreciation to the people coming from different places, and discussing with my legal representative what appropriate legal action I might take. The statement of charges accuses me of planning and organizing a series of actions. This is completely inconsistent with the facts. Those actions were improvised by the internet friends, who came here out of righteous indignation. There was nobody who “planned” or “organized” these actions. Not only was I unaware of it, but after these events, I clearly expressed that I objected to these actions. All through my life, I have suffered too many persecutions. I was afraid that drastic actions would give an excuse to those people who have illegally detained Anni, and they will further persecute everyone. And I was also worried that (these actions) would make Anni’s hope to return to school vanish. Therefore, I always maintained that we should use moderate, legal approaches. Given enough time, I could find many witnesses to testify this.

My whole life has been devoted to thinking about China’s destiny, and for this end I have suffered much injustice. I can bear these injustices. But now that I am old, I cannot submit to humiliation when my 10-year-old daughter was involved.

People might remember, because his father was persecuted, president Xi Jinping, then a young boy, was also involved, and was persecuted and hurt. Today, 37 years after the Cultural Revolution ended, still there are some people who hold on to the mindset of the Cultural Revolution era. Moreover, they illegally detain a young girl. Among those internet friends who came to Hefei City to visit Anni — Li Hui from Fuyang City, Wang Daxiang from Anqing city, Ding Jiangrong from Hefei City — they all have had experiences in which their children were kidnapped when they were young. All of these children have suffered from psychological trauma that was hard to heal all through their lives.

Just this year, a 14-year- old girl from Kosovo, who illegally stayed in France and went to school there, was arrested by police and deported. This action by the police angered the French public. Eventually the French president, Francois Hollande, had to apologize personally and invited the girl to return to France and continue her study.

Hefei City is not an independent kingdom. My daughter and I lived in Hefei, and it was totally legal for me to find a school that was willing to accept her to continue her education. But Anni was forcefully taken away and was detained alone. She was expelled from Hefei Hu Po elementary school (west district). Until now, we have not received any apology from anybody. Instead, I am arrested for appealing for justice for these crimes, and am now indicted. I indeed cannot understand, with so many law enforcement agencies, why don’t they investigate the truth instead of persecuting the innocent?

The great meaning of this case is whether to support the Cultural Revolution style implication, or to object to it. I insist that I will find justice for my daughter, so that this kind of case will gain people’s attention and such heinous conduct will cease. These years we have seen progress in protecting the rights of minors. Why is it that when it comes upon my daughter, the law enforcement agency deliberately avoided [protecting these rights]?

In recent months, what has made me feel very sorry in jail is that, former Navy Lieutenant Colonel Yao Cheng (Tan Chunsheng) and writer Li Hua-Ping from Shanghai, were detained because of helping Anni. They have a warm heart and have long been dedicated to humanitarian causes. As fathers, they not only love their own children, but also love all the children of the world. They are the rare righteous men in this era. In a difficult time, they held the last line of defense for human society’s conscience.  In this indifferent and grim society, when one day an incident like Wang Yue’s death [note: a two-year-old girl who was hit in the street by multiple cars and ignored by passers by] happens, you will understand that how important it is for people to have the most basic empathy, conscience and a sense of justice.

This April, from all over China there are hundreds of internet friends who came to Hefei to support Anni to return to Anhui City’s Hu Po Elementary School. This is a citizens’ action that asks for love, that asks for conscience, that asks for justice. They only want to express the hope that children all over China, and all over the world, should be loved, and should be protected from kidnapping and illegal detention.

There’s a thief in the United States. One day he stole a car, but when the thief found that there was a sleeping baby in the car, he was scared to death, and drove the car back to the owner.

But when the National Security branch of the Hefei City police bureau tried to drive me back to Bengbu City without any legal basis, and found halfway that I have a 10-year-old girl who went to school in Hefei City, what did they do? They didn’t give up the illegal banishment to me. Rather they thought, “In for a penny, in for a pound,” and they also kidnapped and detained my child. They also threatened the Hu Po elementary school to halt my daughter’s education, and forcefully drove us back to Bengbu City.

Comparing the two events, the American thief still has conscience, while a police officer, Liao Shou-Bao, behaved as cruel as a gangster.

The level of civilization of a society is not built on the self-deceptive propaganda, but rather, is determined by whether to make a choice according to their conscience and sense of justice when faced with problems in people’s daily life and work.

I am expecting the court to make a correct judgment that will stand the test of history.