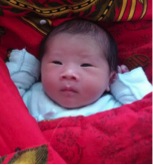 This adorable three-week-old baby girl is “Lian” (her name has been changed to protect her identity) – and she will never know how hard her brave mother fought to keep her alive. Lian’s mother wept as she told our undercover fieldworker her story.

When Lian’s mother was six months pregnant, she and Lian’s paternal grandmother went to the hospital together for an ultrasound to determine the baby’s gender. Lian’s mother told us that as soon as the doctor announced the baby was a girl, her mother-in-law’s expression changed from expectation to disappointment. Because Lian’s father is the only son in his family, her paternal grandparents wanted a grandson intensely. They felt they had lost this grandson when they received the news that Lian is a girl. When Lian’s grandmother thought that Lian was a boy, she had taken tender care of Lian’s mother, cooking her delicious meals. When Lian’s grandmother learned that Lian is a girl, her attitude changed completely: she began pressuring Lian’s mother to abort Lian. Lian’s mother courageously refused to abort her daughter.

After Lian’s birth, without her mother’s consent, the grandmother even found a childless couple who wanted to adopt Lian. Lian’s mother refused to give her daughter up for adoption. She loves Lian and is determined to raise her.

Our fieldworker stepped into this heartbreaking situation with a message of hope and support. We told Lian’s mother that of course, girls are as valuable as boys – something women rarely or never hear in rural China. We also offered her a monthly stipend for a year, to empower her to keep her daughter. Our encouragement and support are a light in the darkness for Lian’s mother. It is our joy and privilege to extend a helping hand to brave women like Lian’s mother, who are fighting for the lives of their daughters in situations that seem hopeless.

For $25 per month, or $300 per year, our GirlSavers have helped WRWF save at-risk babies in China, babies like Lian, who might not be alive if one of our undercover fieldworkers had not met her mother and assured her that little girls are as special as boys. We put our money where our mouth is, offering practical assistance to empower these mothers to keep their daughters.

If you want your donation to go to the Save a Girl campaign, write “Save a Girl” in the memo line. Otherwise, the donation will go where most needed.