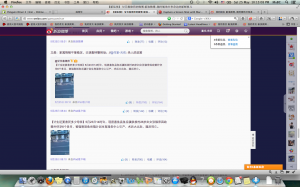 Yuyue Town, Jiayu Village, Hubei Province. According to a May 23 posting on a microblog, Zhang Yinpin died of a forced abortion. She was six months pregnant.

Zhang did not have a birth permit. After the forced abortion, she suffered a hemorrhage which the hospital could not stop.

This news was posted briefly on a microblog site, but then quickly removed by internet censors. The family could not be reached for comment. WRWF obtained a screenshot of the microblog.

Reggie Littlejohn stated, “As President Obama and President Xi Jinping meet today, neither one can deny that China’s One Child Policy is still enforced through late term forced abortion. They also cannot deny that China censors its internet, removing information that documents human rights atrocities committed by the Chinese Communist Party. Human Rights, including the rights of women to bear children without suffering violence from their government, should be the top issue discussed by these Presidents during their talks today.”

This entry was posted in Forced Abortion, Uncategorized. Bookmark the permalink.