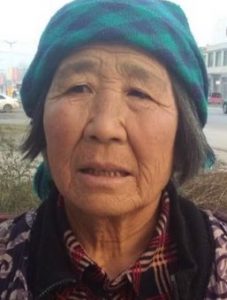 “Mrs. Li” is 70 years old and lives in rural China. Her husband died 30 years ago of leukemia. They could not afford treatment, so her husband died without it.

She had three children.  Her daughter was killed in a car accident.  Her two sons are living in different villages and do not take care of her.

Because she does not have enough money for food, she eats only vegetables – no meat.  Sometimes she eats only salt.  She bought a rope ten years ago, so she can hang herself one day if she cannot take care of herself any more or if she gets sick.

This week marks the 38thanniversary of China’s One-Child (now Two-Child) Policy, the most massive social experiment in human history, responsible for hundreds of millions of forced abortions and sterilizations, as well as the sex-selective abortion of tens of millions of baby girls.  These casualties are as well known as they are tragic.

Relatively unknown, however, is another enormous demographic group virtually ignored thus far: the elderly, especially widows. To address this, Women’s Rights Without Frontiers announces a major, new initiative:  our Save a Widow Campaign.

The One Child Policy has destroyed traditional Chinese family structure.  Before September 25, 1980, when the policy was officially instituted, China was mostly rural.  Farming families were large, as they needed to be in order to work the land.  Typically, one couple would have many children, and each of their children would have many children. When the original couple grew old and needed care, their needs were spread among many children and grandchildren, so that no one felt burdened.

Because of the One-Child Policy, many families now find themselves in the inverse position of one couple supporting four parents and eight grandparents.  That couple also needs to support themselves and their children.  Thus, many working age couples find themselves stretched beyond capacity.  Many of them simply do not have the resources of time and money to care for so many aging parents and grandparents. Additionally, with urbanization, many young couples have moved from the countryside to the cities, in order to make ends meet financially.  This move means that many elderly are left alone, with no family member present to care for them.

Sadly, senior suicide is on the rise.  According to a report in the China Daily — a Chinese government–affiliated English language news outlet — the suicide rate of rural Chinese elderly has increased 500% in the past two decades, from 100 to 500 per 100,000.  According to sociologist Liu Yanwu, who studied the issue for six years, “. . . I was more shocked by the lack of concern in villages where the elderly commit suicide . . . It seems that death is nothing to fear, and suicide is a normal, even a happy end.”

In the past, elders were venerated and cared for by their children and grandchildren. “Filial piety was valued in old China, but many elderly people in rural areas can no longer depend on their children as a result of the great economic and social changes over the past three decades,” continues Liu, “and the pension system fails to compensate . . . In China, farmers are vulnerable, and old farmers are the most vulnerable.”

Reggie Littlejohn, founder and president of Women’s Rights Without Frontiers, stated, “the studies show that the elderly, especially elderly widows who traditionally have depended on their children to support them in old age, are becoming destitute and so desperate that they are committing suicide.  They are the invisible victims of the demographic disaster caused by the One Child Policy and are in urgent need of help.  For this reason, we are now launching our Save a Widow Campaign.  We have boots on the ground inside of China, restoring the dignity and giving practical support to abandoned, destitute widows in China to show them someone cares.

“One of the widows we are helping is Mrs. Li, whose story is recounted at the beginning of this article.  Our fieldworker went to her door and encouraged her, saying that we will give her a monthly stipend to help her eat every day, so that there will be no more days where she eats only salt.  We have given her hope.  She was so happy she said that we are like a divine being, “saving people who are living helpless and hard lives.”

To learn more about the Save a Widow Campaign, click here.

China’s Elderly Population to Peak at Half a Billion in 2050 https://gbtimes.com/chinas-elderly-population-to-peak-at-half-a-billion-in-2050

Save a Widow Campaign https://www.womensrightswithoutfrontiers.org/index.php?nav=help-chinese-widows