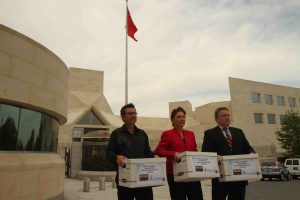 Littlejohn, with Rep. Chris Smith (R.) and Evan Grae Davis, Director of the "It's a Girl" film, in front of the Chinese Embassy, holding 200,000 signatures on the petition against gendercide and forced abortion in China

Washington, D.C. Women’s Rights Without Frontiers president Reggie Littlejohn and Rep. Chris Smith led a delegation from Capitol Hill to the Chinese Embassy to deliver 200,000 signatures on a petition to end gendercide and forced abortion in China. Though Rep. Smith and Littlejohn tried repeatedly to gain access to the Embassy to deliver the petition signatures, the Embassy refused to grant access.

Littlejohn stated, “These signatures are from 200,000 people from more than 70 countries. They represent a widespread, international outcry against forced abortion and gendercide in China. Through the dark glass and barred windows of the Embassy, I could see someone walking inside. They would not answer the door to let us in, though we rang the bell repeatedly. This refusal is symbolic of the way that the Chinese Communist Party turns a deaf ear to all those who criticize its human rights record. They may refuse to accept our petition, but they will not silence us. We will continue to raise our voices on behalf of the hundreds of millions women who have been forcibly aborted, up to the ninth month of pregnancy, and the girls who are being selectively aborted, just because they are girls. These practices constitute a crime against humanity and they must be stopped.”

Rep. Smith, a tireless advocate for Chinese human rights, stated, “Just last Friday, the U.S. State Department China 2012 Human Rights Report stated that the rate of female suicide in China has increased from 500 to 590 per day. The report noted that three times the number of women as men commit suicide in China. Two of the factors cited include ‘the traditional preference for male children, [and] birth limitation policies.’ This is the true War Against Women.”

The petition signatures were gathered by the “It’s a Girl” film documenting gendercide in India and China, in collaboration with Women’s Rights Without Frontiers.

One Response to Chinese Embassy Refuses Petition Against Forced Abortion, Gendercide in China