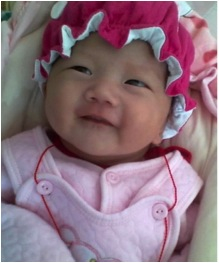 “Eu-Meh,” saved from sex-selective abortion by WRWF’s “Save a Girl” Campaign

This Mother’s Day, let us remember the mothers in China who are not as fortunate as we, who are indeed suffering greatly because of the forced abortion of illegal pregnancies, and also the intense pressure to abort or abandon baby girls, especially second daughters.

The United States Congress recently held a hearing on PRENDA, the Pre-Natal Non-Discrimination Act, designed to protect girls from sex-selective abortion in the United States.  Reggie Littlejohn submitted the following Statement to be included in the Congressional Record:

According to a U.N. expert, up to 200 million women are missing in the world today due to gendercide, sex-selective abortion.   This number is greater than all the casualties of all the wars of the twentieth century combined.  This is the true “war on women.”

Sex-selective abortion is the ultimate violence against females.  Aborting a baby just because she is a girl is the ultimate act of gender discrimination.  It says that females are so worthless we don’t deserve to be born, to draw breath on this earth.  Can we credibly say that we stand for women’s rights without standing against the sex-selective abortion of future women?

Sex-selective abortion is strongly related to forced abortion.  Some say sex-selective abortion is protected by a woman’s right to choose to terminate a pregnancy for any reason.  This view ignores the crushing social, economic, political and personal pressures that trample women carrying girls in cultures with a strong son preference.  All too often, women in these cultures do not choose to abort their daughters.  They are forced.

A woman need not be dragged out of her home and strapped down to a table to be a victim of forced abortion.  Persistent emotional pressure, estrangement from the extended family, threat of abandonment or divorce, verbal abuse, and domestic violence often overpower women who otherwise would otherwise choose to keep their daughters.  And when people from cultures of violent son preference move to another country, such as the United States, these same pressures follow them.

For example, a 2011 study by Dr. Sunita Puri of the University of California at San Francisco found that 89 percent of immigrant Indian women interviewed in California, New Jersey and New York, who became pregnant with girls during the study period, had abortions.  None who were pregnant with boys aborted them.  The participants identified pressure from their husbands and mothers-in-law as “sources of significant pressure” for the sex-selective abortion.  See, “Pressure to Bear Sons Leads Some Indian Immigrant Women to Sex Selection, Abortion, Study Finds.” http://coe.ucsf.edu/coe/news/sex_selection.html

Systematic, sex-selective abortion constitutes gendercide.  Because of this gendercide, there are an estimated 37 million more men than women in China today.  The presence of these “excess males” is the driving force behind human trafficking and sexual slavery, not only within China but from surrounding nations as well.

Our “Save a Girl” Campaign is saving the lives of baby girls in China.  We reach out to women who are contemplating abortion of their baby girls, who are being pressured to abandon their baby girls after birth, or who are so desperately poor that their baby girls are at risk.   We encourage these women to keep their baby girls and offer them support for a year to help them care for their daughters. With our intervention, the vast majority of women choose to let their baby girls live and raise them as their beloved daughters.   Our Campaign, which has now helped more than 200 baby girls, shows the effectiveness of simple, compassionate intervention.   We are working to turn the tide against gendercide in China, one baby girl at a time.

Learn more about our Save a Girl Campaign here: