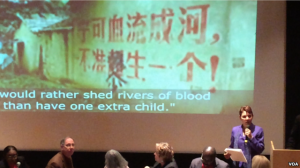 Reggie Littlejohn speaks to leaders from dozens of nations at the UN headquarters, March 19, 2015. Credit: Voice of America, Ron Shi

I was humbled to speak three times at the United Nations Commission on the Status of Women earlier this month, to standing room only crowds representing more than 30 nations. Our message: forced abortion and gendercide under China’s One Child Policy are the greatest crimes against women and girls in the world today. Further, the U.S. and the U.N. are complicit through funding the UNFPA, the United Nations Population Fund. Our message was published far and wide, including in the Chinese press, prompting major pieces in Voice of America and Radio Free Asia. The Women’s United Nations Reporting Network published our Statement to tens of thousands of women’s rights activists all over the world.  Here is an excellent piece by WorldNetDaily, republished with permission.

UNITED NATIONS – The United Nations and the Obama administration are turning a blind eye as millions of girls in China and India are murdered, and women are forced to undergo abortions and sterilizations.

A group of women’s-rights activists made that explosive accusation Friday at a standing-room-only event, as the U.N. marks the 20th anniversary of the World Conference on Women.

“China is so powerful in the United Nations no one wants to offend them, so they are 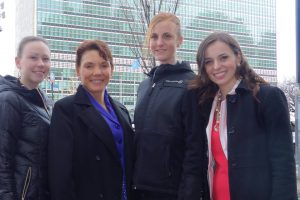 Reggie Littlejohn spoke to a stand room only crowd at the UN on March 13, 2015, together with Rebecca Oas of C-FAM, Anne Morse of the Population Research Institute, and Arina Grossu of the Family Research Institute. Photo courtesy of FRC.

willing to turn a blind eye to the biggest women’s-rights issue in the world today – forced abortions in China,” Reggie Littlejohn, president of Women’s Rights Without Frontiers told WND.

The Family Research Council, Population Research Institute and the Catholic Family and Research Institute joined Littlejohn to draw attention to the widespread incidence of forced abortion, forced sterilization and outright murder of female infants in China and India.

A U.N. expert estimates up to 200 million women are missing in the world today due to ‘gendercide,’ the selective abortion, abandonment or fatal neglect of baby girls.

“The words, ‘it’s a girl,’ are the deadliest words on Earth when said at the birth of a child” in China and India, Littlejohn said.

The Chinese Communist Party boasts its “One-Child Policy” has “prevented” 400 million lives – a number greater than the entire population of the United States and Canada. The Party’s use of forced abortion is well documented and is compounded by the widespread use of sex-selective abortions by parents seeking to have a male child. When couples are restricted to one child, women are often pressured by husbands and in-laws to only give birth to a boy.

It’s reported that China has 13 million abortions per year – that’s 35,000 per day and 1,485 per hour. While China’s population is four times greater than that of the U.S., the abortion rate is 13 times higher.

The U.S. is complicit with forced abortions in China through funding of the U.N. Population Fund (UNFPA), Littlejohn charged.

“In China, the UNFPA and International Planned Parenthood have been working hand in hand with the Chinese Communist Party on family planning, which has been found to be coercive,” she said.

Previous administrations cut funding for UNFPA because of its complicity with forced abortion and forced family planning in China.

“One of the first things President Obama did on coming into office was to restore that funding,” noted Littlejohn.

“Hillary Clinton has come out strongly opposing forced abortion and forced sterilization in China on one hand, and on the other hand she has said we’re not going to let human rights get in the way of our trade relations,” Littlejohn said.

President Clinton’s administration was the first to de-link human rights from trade relations with China.

WND reported how Beijing used pro-”free trade” advisers inside the Clinton administration to persuade President Clinton to ignore human-rights abuses in China and lay the foundation for wholesale U.S. investment in the communist nation. The Clinton family has received millions of dollars in speaking fees and donations to the family foundation from companies doing business in or tied to China.

The U.N. has been marking the 20th anniversary of the Fourth World Conference on Women this week. Dignitaries from around the world attended that conference in Beijing 20 years ago, including most notably Hillary Clinton. Events at U.N. headquarters in New York this month are discussing what progress has been made on the status of women.

Note:   WRWF thanks the NGOs co-sponsoring the UNCSW events at which she is speaking: Endeavour Forum, Family Research Council, C-Fam, Eagle Forum and the Population Research Institute.