WRWF’s Littlejohn Keynote Speaker to 20,000 at Canadian March Against Gendercide 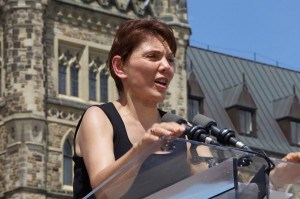 Reggie speaks out against gendercide and forced abortion to an estimated 25,000 at the March for Life, Canada

Ottawa, Canada.  The Canadian March for Life took on a human rights focus this year, dedicated to the theme, “End Female Gendercide.”  Women’s Rights Without Frontiers president, Reggie Littlejohn, was the keynote speaker for the March. An estimated 20,000 to 25,000 people gathered on Parliament Hill in Ottawa – the largest crowd in the history of the March.

Littlejohn stated, “I was truly inspired to address a crowd this size, filled with people carrying signs saying ‘End Female Gendercide’!   According to one UN estimate, up to 200 million women are missing in the world today, due to the sex-selective abortion of baby girls.  I am thrilled that this issue, which was invisible just a few years ago, is now front and center.”  The Canadian March for Life received significant media coverage from the CBC, EWTN, Lifesite News and the National Catholic Register. 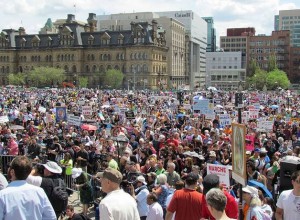 An estimated 25,000 gathered on Parliament Hill at the March for Life in Ottawa, Canada

Littlejohn highlighted the “Save a Girl” campaign, in which WRWF’s on-the-ground network intervenes where women are being pressured to abort or abandon their baby daughters, offering them encouragement and a monthly stipend.  Littlejohn stated, “This campaign empowers women to keep their daughters.  We are ending gendercide, one baby girl at a time.” 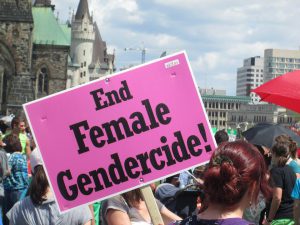 "End Female Gendercide" was the theme for the March for Life, Canada in 2013

The documentary, “It’s a Girl,” was screened to a crowd of more than 900 at the youth conference after the March.  The authoritative documentary on gendercide, “It’s a Girl” was filmed on location in India and China and contains astonishing interviews of women who have been victims of gendercide, or who are actively resisting the pressure to abort or abandon their baby girls, at great sacrifice to themselves.  Littlejohn is featured in the film as an expert on China’s One Child Policy. 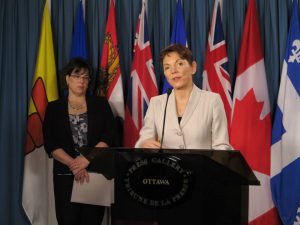 Reggie spoke against female gendercide at a press conference in the Canadian Parliament, before the March

Littlejohn stated, “It was a great encouragement to me to have so many high school and college students come up to me after the film, many with tears in their eyes, and say that they want to commit their lives to ending this terrible injustice against women and baby girls.  It will take this kind of fiery commitment to stop this horrific practice, which otherwise is increasing worldwide.”  Together with the filmmakers, Littlejohn premiered the film in the European and British Parliaments, as well as the United States Capitol.

Support the Save a Girl campaign:

Watch a video against forced abortion in China (4 mins)