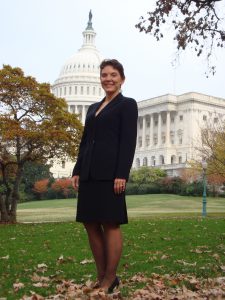 Reggie Littlejohn at the U.S. Capitol

Women’s Rights Without Frontiers is partnering with Rep. Chris Smith and Rep. Jim McDermott in a bipartisan screening of the “It’s a Girl” documentary about gendercide in India and China. Below is the text of her remarks, to be delivered today at 5:30 p.m. at the United States Capitol Visitors Center.

Thank you, Rep. Smith, Rep. McDermott and distinguished guests. It is truly an honor to be given this opportunity to address one of the great human rights issues of our age: violence against women in the form of systematic, widespread sex-selective abortion.

According to one U.N estimate, there are up to 200 million women missing in the world today due to gendercide.

Forced abortion is not a choice. More often than not, gendercide is not a choice either. There is a strong correlation between sex-selective abortion and coercion. Crushing social, economic, political and personal pressures in cultures with a strong son preference trample women carrying girls. All too often, women in these cultures do not “select” their daughters for abortion. They are forced.

In China, the birth ratio of girls to boys is the most skewed in the world: approximately 100 girls born for every 119 boys. Sons traditionally carry on the family name, work the fields, and take care of their parents in old age. A daughter joins her husband’s family at marriage. There is a saying: “Raising a girl is like watering someone else’s garden.” The One Child Policy exacerbates the underlying son preference. When couples are restricted to one child, women often become the focus of intense pressure by their husband and in-laws to ensure a boy.

Systematic, sex-selective abortion constitutes gendercide. Because of this gendercide, there are an estimated 37 million more men than women in China today. The presence of these “excess males” is the driving force behind human trafficking and sexual slavery, not only within China but from surrounding nations as well.

Finally, China has the highest female suicide rate of any country in the world. According to the U.S. State Department China Human Rights Report released last Friday, the numbers of female suicide have risen sharply in the past several years, from 500 women per day to 590.

Fortunately, there is hope. Women’s Rights Without Frontiers has launched the “Save a Girl” Campaign in rural China, and we are stopping gendercide, one baby girl at a time. We have field workers in China who reach out to women who have had an ultrasound, learned that they are pregnant with a girl, and are planning to abort or abandon her. A field worker will visit that woman and say, “Don’t abort your baby just because she’s a girl. She’s a precious daughter. We will give you a monthly stipend for a year, to help you support her.”

The practical support we offer empowers these women to keep their daughters. By the time the girl is three months old, she’s laughing and smiling and the whole family is in love with her. They can’t imagine life without her and thank us for saving the life of their daughter. This is what gets me out of bed in the morning – knowing that there are babies in China who are alive today because of our efforts. It’s astonishing how little money it takes to save someone’s life in China.

This is the official “It’s a Girl” film’s action campaign for China. We would like to expand this campaign. Every struggling mother in China deserves help to keep her daughter. Together, we can end gendercide and sweep sex-selective abortion into the dung-heap of history, where it belongs.

Learn more about the Save a Girl Campaign here: