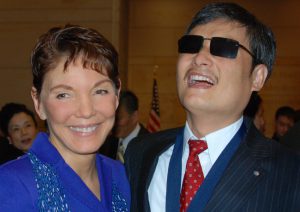 Reggie with Chen Guangcheng after his arrival in the U.S.

May 19 marks the five-year anniversary of Chen Guangcheng’s arrival in the United States. WRWF President Reggie Littlejohn advocated tirelessly for Chen’s release from 2008 until his 2012 release and led an international coalition to free him. What follows are her personal reflections at the time of this anniversary.

May 19, 2012 was perhaps the most exciting day of my life. After years of non-stop international advocacy, several emergency Congressional hearings (called by Rep. Chris Smith, without whose dedicated efforts Chen would likely never have made it to the United States), weeks of struggle with the Chinese government and several sleepless nights, I was standing at the Newark airport, waiting for the arrival of the man whose plight had become the central focus of my life.

My heart went out to Chen Guangcheng the first time I read of him. Blinded by an illness at age three, he and his wife, Yuan Weijing, had displayed almost supernatural courage and compassion, documenting at great risk to themselves a pattern of brutal forced abortions and sterilizations in Linyi, where they lived. Women were being dragged out of their homes, strapped to tables and forced to abort babies they wanted up to the ninth month of pregnancy. Whole villages were fleeing to sleep in the surrounding fields to hide from Family Planning Police. Relatives of an illegally pregnant woman in hiding were being detained and tortured.

Chen was detained and then placed under severe house arrest for years for exposing these atrocities, and the Chinese government heavily persecuted his entire, extended family, detaining and torturing them as well.

Now, five years after first setting foot on U.S. soil, Chen and his family are living safely in the Washington, D.C. area. His home is filled with light and life. He and Weijing just had their third child, a beautiful boy who is the joy of the family. Chen continues his advocacy and has invited me to collaborate with him. We have appeared together on Voice of America, spoken together at the Heritage Foundation, testified together at Congress.

Every time I go to see his family, it still feels like an impossible dream come true. One of the greatest heroes of the twenty-first century, a man whose courage I cannot begin to comprehend much less imitate, is now my good friend. I can only respond with humility and gratitude.

And yet, five years after Chen’s arrival in the United States, and despite his passionate advocacy to end it, coercive population control in China remains. China has shifted from a One Child Policy to a Two Child Policy. This modification was presented by the Chinese government as an “abandonment” of the One Child Policy, implying that all coercive population control had ended. No so. Unmarried women and women pregnant with a third child still face forced abortion. The sex-selective abortion and abandonment of baby girls continues, especially for second daughters.

The fight continues. But now, instead of fighting the lonely battle for Chen’s life and freedom on the other side of the world, I have the honor of facing the battle shoulder to shoulder with him – with one of the greatest human rights champions the world has ever known, someone I honor and admire more than words can ever say.