Posted on September 19, 2014 by Reggie Littlejohn 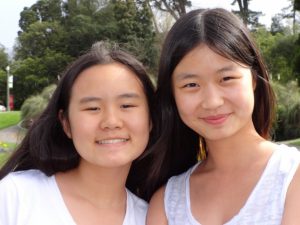 We are Zhang Ruli and Zhang Anni, the daughters of Chinese pro-democracy activist Zhang Lin.  Our father’s case was tried [in December 2013], and [after three delays], now his sentence has finally been announced. The news is shocking: Zhang Lin has been sentenced for three years and six months!

What did he do wrong?

In February 2013, our father brought Anni from our hometown, Bengbu City, to a school in Hefei City. Simply because my father is a pro-democracy activist, 10-year-old Anni was abducted by the state police of Hefei City and was detained alone for more than 4 hours. She spent the night in detention and was not allowed to go back to school in Hefei. Little Anni was thus deprived of her education, and she kept herself at home and refused to meet people [because she was afraid of people due to her experience being detained]. If his 10-year-old, innocent daughter were involved and persecuted like this, what father would NOT seek justice for her? Not to mention that our father is an intrepid man!

After this incident, our father sought justice for Anni, and was supported by many internet users in China after he released the information. Last April, Chinese netizens spontaneously gathered around Hefei, seeking justice for our father and Anni, in the hope that Anni could return to school. Contrary to their wishes, they did not receive justice. Rather, these friends were subjected to different levels of detention as a punishment. In addition, my father and Anni were monitored by Bengbu City’s National Security Guards, 24 hours a day since that time.

In the evening of Sept 18th 2013, our father, Zhang Lin, was arrested on the charge of “disturbing the public order.” On Dec 18th, his case was tried, but no verdict was rendered. Between then and now, the Provincial High Court delayed the sentencing three months; the Supreme Court delayed the sentencing twice, and each extension was for three months. The latest extension began on August 18th. We thought it would be dragged to November, but who could have predicted that on August 30th, the court would suddenly give notice that the verdict would be rendered on September 5th. The notice came out so late that neither of my father’s lawyers could attend the sentencing on that day. Only my paternal grandparents [who are sick] helped each other walk to attend.

Prior to this, because our father Zhang Lin has adhered to the path of democracy, he has been imprisoned four times during his life and lost his freedom for a total of thirteen years.  Because of the long-term imprisonment and the abuses he had in prison, our father has suffered many diseases, from which he has not been cured. Because of this advocacy for the path of democracy, our father dedicated almost his entire life, but finally he still got mired in imprisonment, and his children have been forced out of their home country.Now, we are very concerned that his physical condition can no longer endure the torture of jailing.

But carefully recall, what exactly did he do wrong? Was it wrong to tell people the truth that he was being persecuted day and night? Was it wrong to stand up when his daughter was kidnapped from school and detained for 24 hours by police officers? Was it wrong to fight for his daughter’s right to school? In my opinion, the Chinese Communist Party is retaliating against dissenters like my father by putting them in jail because people like my father reveal the CCP’s dictatorship and corruption to the whole world!

At the same time, we appeal for Uncle Yao Cheng, Uncle Zhou Weilin and Uncle Li Huaping. Because of the Heifei event, they are still in jail right now. On July 30th this year, Uncle Li was put on trial in Wuhu city; on August 6th of this year, uncle Yao and Zhou were put on trial in Hefei. None of them has received his verdict yet. They used their just hearts, bravely stood up and cried for freedom. Their spirit inspired us. We cannot forget them as well as many other political prisoners in China who are being persecuted, because they are sacrificing their freedom in exchange for the freedom of others! We hope our Father and Uncles will be released from prison as soon as possible. We call upon President Obama and other national leadership to pay more attention to the human rights situation in China. We also expect China to be on the road to constitutional democracy soon!

In the end, we are two daughters who are missing their father. We appeal again and loudly for our father and uncles: Pay attention to them please! Because your attention may help bring about their freedom!