Posted on September 1, 2014 by Reggie Littlejohn 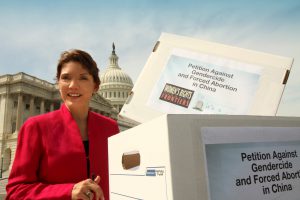 Q&A: God used Reggie Littlejohn’s suffering to shape her into an advocate for China’s voiceless

Reggie Littlejohn is the founder and head of Women’s Rights Without Frontiers, a leading opponent of forced abortion in China. Here are edited excerpts of our interview.

How did you startle your parents when you were 16 and refused to go to church anymore? I grew up in a Christian home and at age 16 decided there’s no God. So I wrote my parents a letter, sat them down, had them read the letter aloud, and told them I was no longer going to church.

And how did they take that? I’m sure they prayed over it, but they allowed me to not go to church, so I did not go during high school and college.

You grew up in a Christian home, but never read a whole book of the Bible. No. When I read John, I saw who Jesus was—and this was not whom I was rejecting. So that moved me from being an atheist to being an agnostic.

Because you appreciated it but still did not believe it? Right.

You married at age 27? Yeah, and he had something to do with my conversion in the sense of believing in God, because falling in love with him and looking into his eyes I just could not believe that he had simply evolved from blue-green algae. It was just not possible.

You worked as a litigator for eight years in the San Francisco area and toward the end did pro bono work for refugees from China who were victims of the one-child policy. What effect did that have on you? I remember sitting behind my desk in my beautiful law firm surrounded by freedom and civilization thinking to myself, Right at this moment, on the other side of the world women are dragged out of their homes, strapped down to tables, and forced to abort babies up until the ninth month of pregnancy. I was utterly appalled.

You had some sleepless nights about that? Many. It haunted me that this was happening. Typical of any associate, I had a sleeping bag in my office. At one point I did not leave my office for 10 days, just working flat out. I was driven.

Haunted and driven, you also had a miscarriage. I was heartbroken. I called my mother and asked, “Why would God allow me to become pregnant with a baby who would be loved and cared for wonderfully in this world—and then take that baby away?” My mother said, “We will never know the answer to that question, but God does everything for a purpose. And I believe if you offer your suffering up to Him, He will use it.”

And then another miscarriage. It’s not the same as having someone break into your home, drag you out, and force you to abort a baby, usually without even anesthesia. But I know what it is like to lose a baby, so when I heard about forced abortions, my heart went out to these women in a way that it might not have if I had not miscarried my own babies.

Then you had medical problems. I had bilateral mastectomies and caught this hospital super bug, the MRSA staph infection. My hair was coming out in handfuls. My kidneys, my liver, my immune system were all affected, and I was disabled for five years. I went overnight from high-powered litigation lawyer to lying on my back and begging God to spare my life.

How did that suffering change you? I went from being a driven person to someone completely helpless. God had to do that to me because I’m so stubborn. If He hadn’t, probably I’d be a partner in a law firm right now and continuing on that path. Since I was not committing adultery or murder, since I wasn’t stealing or lying, since I represented Chinese refugees on the side, I thought I was an exemplary Christian.

What changed your mind? I saw in reading the Bible over and over again that almost my entire life was based on a violation of the first commandment, “I am the Lord your God … you shall have no other gods before me.” Obviously I was not worshiping statues of Baal and Molech in my living room, but I was idolizing money, power, prestige, my boss, my house, my car. Everything I idolized, God took from me. I was left with complete dependence on Him. And He turned me from a life of focusing on making lots of money as an attorney to saving lives in China.

How did you go deeper into that? In 2008 I was one of thousands of people to receive an email about a conference on Chinese and North Korean human rights. I wrote the president saying, “How come no one is speaking about the one-child policy?” The president emailed me back: “Don’t you realize the coercive enforcement of the one-child policy is a thing of the past? It’s all voluntary now.” And I said, “Oh, is that so?” I started hitting him with document after document, to the extent where he finally said, “I surrender. I see now that forced abortion is happening right now in China. Would you be our expert, the first person ever to address the European Parliament on the issue of the one-child policy?”

And that led to your setting up Women’s Rights Without Frontiers, with a laser focus—just China’s one-child policy—and a name that can appeal to people on the left. Yes. This is a women’s rights issue.

I’ve read in the conventional media that China’s one-child policy is over. What’s the reality? Headlines like “China Abandons the One-Child Policy” are an ongoing, intense frustration for me. China is heading for a demographic disaster, so leaders are slightly modifying the policy: If one member of a couple is an only child, the couple can have a second child. The exception is very narrow and will affect only 5 million couples. Even under this exception, those couples who can have two children will need to have a birth permit for their first child and their second child. If they don’t have one, they are still at risk of forced abortion.

What about your own family, which has grown recently? Well, we have two new Chinese—I call them daughters, because they are daughters to my husband and me, although we cannot legally adopt them—but they are the daughters of a famous dissident. The Chinese Communist Party persecutes the children of dissidents, but we were able to get them to the United States. They’re now 11 and 19.

Are they reading whole books of the Bible? Every night we read about half a chapter of the Gospel of John and discuss it—a Bible study at the dinner table every night, and church on Sunday.

View the original article at WorldMag.com. Republished with permission: http://www.worldmag.com/2014/06/complete_dependence/page1