Posted on January 21, 2011 by Reggie Littlejohn 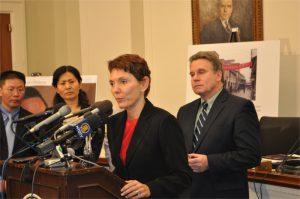 Reggie Littlejohn speaks out against forced abortion in China at the Capitol Hill Press Conference on Chinese Human Rights of 1/18/11. Also pictured are Bob Fu, President of China Aid, Geng He, wife of Gao Zhisheng, and Congressman Chris Smith.

When questioned by Representative Ileana Ros-Lehtinen, the new chair of our House Foreign Affairs Committee, you denied that China forces women to have abortions under its One Child Policy.  What you told Rep. Ros-Lehtinen is a falsehood, astonishing in its audacity.  By attempting to deceive our Congressional Representative, you are attempting to deceive the US government and the American people.

Your claim is easy to disprove.  In October 2010, an appalling video appeared of a woman who had been beaten and forced to abort at eight months.  The video shows the jail cell in which this pregnant woman and others like her are forced to receive injections through their wombs and into the skulls of their unborn babies, to kill them.  This is happening to thousands of women all over China.  You can watch this video here.  http://www.womensrightswithoutfrontiers.org/blog/?p=25

Forced abortion is not the only atrocity committed in the name of the One Child Policy. Here are some other serious human rights violations that leaked out of China in 2010:

Forced Sterilization. Between April 7 to 27 of 2010, the Population and Family Planning Bureau detained 1,300 people in a campaign to sterilize nearly 10,000 people in the city of Puning, Guangdong Province.  In order to meet sterilization quotas, the Puning population control authorities detained parents—as well as other family members, such as elderly grandparents—for refusing the sterilization procedures.

Infanticide. In May 2010, crematorium workers in Guangdong Province found an infant crying in a “medical waste” receptacle on its way to being cremated, according to Xinhua, China’s official news agency. The crematorium workers immediately sent the infant back to the hospital. Later that day, the hospital sent the infant back to the crematorium, dead. The hospital offered no explanation of the cause of death.  To see a web-based discussion among Chinese doctors about how best to kill infants who are being born alive during induced labor forced abortions, read “Best Practices – Infanticide.”  This document was found on the official Chinese website for obstetricians and gynecologists. http://www.womensrightswithoutfrontiers.org/index.php?nav=congressional

Psychiatric Torture. In November 2010, Radio Free Asia reported that Gu Xianghong languishes in an “Ankang,” a special Chinese psychiatric hospital run by police.  In a video quoted by RFA, Gu says, “They put electrodes on my temples and they were burned black. They handcuffed me and chained my feet . . . My [entire family] and home have been ruined by the village government.” They also subjected her to injections against her will. According to the report, Gu has been jailed nine times in the Ankang since 1992.  Why?  Because she is suing the local government over “family planning issues.”

President Hu, if forced abortion, forced sterilization, infanticide and psychiatric torture are not policies of the Chinese Communist Party to enforce the One Child Policy, then why are you not prosecuting those cadres who are perpetrating these crimes against humanity?  Why, instead, are you persecuting those who are exposing these crimes?  Take, for example, blind activist Chen Guangcheng, who exposed the 130,000 mass forced abortions and forced sterilizations in Linyi County, Shandong Province, in 2005. For this he served a four-year prison sentence, during which time he was severely beaten and denied medical attention.   On April 30, 2006, Time Magazine named him in its list of “2006’s Top 100 People Who Shape Our World,” in the category of “Heroes and Pioneers.”  Now, he remains languishing under house arrest.  Free Chen Guangcheng!

The coercive enforcement of your One Child Policy causes more violence against women and girls than any other official policy on earth and any other official policy in the history of the world.  And yet, on September 26, 2010, the China Daily News reported an official statement by the head of your National Population and Family Planning Commission that the One Child Policy will remain in force for “decades.”

President Hu, your attempted cover-up will not work.  We are committed to exposing the truth about your One Child Policy:  it is China’s war on women and girls.  Our online petition has now gathered more than 5000 signatures from 88 countries, so I speak for people from all over the world when I say, stop forced abortion in China!

The following links are relevant to this letter:

“China’s Forced Sterilization Campaign Is a Crime Against Humanity,” The Epoch Times, [Online] Available http://www.theepochtimes.com/n2/content/view/34698/, May 4, 2010