Pres. Obama and Pres. Hu, Forced Abortion in China Must Be Stopped!

Posted on January 20, 2011 by Reggie Littlejohn 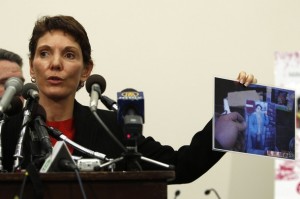 On January 18, Reggie Littlejohn spoke at the Capitol Hill press conference on Chinese human rights called by Congressman Chris Smith.  Littlejohn urged President Obama to discuss human Rights with President Hu Jintao during his visit to DC.  Here is a transcript of her remarks.

In 2009, Liu Dan was 21 years old and 9 months pregnant when family planning police grabbed her out of her home, dragged her pleading and crying to the local family planning office, and forcibly aborted her full term baby.  They did this even though they already knew from medical tests that she had high blood pressure and that a forced late term abortion would be dangerous for her.  After the forced abortion, she lay alone and unconscious in an operating room in the family planning center.  Sensing something was wrong, her fiancé burst into the room at 3:00 a.m. to find her bleeding from the eyes, nose, ears and mouth.  Even so, the family planning police refused to call for emergency help, until her family insisted.  Help arrived too late.  Liu Dan died, along with her full term baby.

China’s One Child Policy causes more violence against women and girls than any other official policy on earth.  It is China’s war on women.  I say to President Obama, any discussion of women’s rights, or human rights, would be a charade if forced abortion in China is not front and center.  It does not matter whether you are pro-life or pro-choice on this issue.  No one supports forced abortion, because it is not a choice.  Rather, the Chinese forced abortion policy is systematic, institutionalized violence against women.

The Chinese Communist Party says that the One Child Policy is none of our business – that it’s their internal affair.  This argument is a smoke screen.  First, the Chinese government has signed several international treaties that protect the rights of women and families.  Forced abortion violates these treaties.

Second, the One Child Policy has given rise to gendercide, the sex-selective abortion of baby girls.  Because of this, there are an estimated 37 million more men than women in China – men who will never marry because their future wives were aborted before they were born.  This gender imbalance is the driving force behind human trafficking and sexual slavery.  Women and girls not only within China, but also from many of the surrounding countries, are trafficked as sex slaves and forced brides to service these 37 million “bare branches.”

This is not an internal affair for China.  It is an international issue, and it calls for an international response.  Women’s Rights Without Frontiers announces that we have an online petition to stop forced abortion and sexual slavery in China.  We already have more than 5000 signatures from 88 countries, all over the world.  So, through this petition, I represent more than 5000 people from 88 countries who are saying with one voice:  President Hu Jintao, stop forced abortion in China!

Another thing the CCP would like the world to believe is that ethnic minorities are exempt from the One Child Policy.  This is pure propaganda.  My colleagues at TibetTruth have just released an extensive, comprehensive report of the atrocities committed against Tibetan women in the name of the One Child Policy. http://tibettruth.com/2011/01/14/report-exposes-horrors-of-coercive-birth-control-in-occupied-tibet/ And Rebiya Kadeer has submitted into the Congressional Record a hard-hitting report on the genocidal use of the One Child Policy against the Uyghurs. http://www.womensrightswithoutfrontiers.org/index.php?nav=congressional

How does forced abortion in China affect us as Americans?

CNN’s Ted Turner has repeatedly called for the whole world, including the United States, to adopt the One Child Policy, most recently at the Cancun Climate Conference just last month.  Turner says that its enforcement is not “draconian.”  This statement is demonstrably false.  The One Child Policy is enforced through forced abortion, forced sterilization and infanticide.  Adopting it world wide would hurl women’s rights back to the dark ages.  Ted Turner, if you’re watching, I challenge you to debate me on this — if you dare to have a substantive exchange on this subject.

In China, a woman’s body is not her own.  It belongs to the state.  A woman’s womb is the most intimate part of her body – physically, emotionally and spiritually. For the Chinese Communist Party to force its bloody hand right into a woman’s womb and crush the life inside her is a heinous crime against humanity.  I call upon President Obama – if you care about women’s rights, if you care about human rights – tell President Hu Jintao, FORCED ABORTION IN CHINA MUST BE STOPPED.