Reggie Littlejohn highlighted the suffering of women under China’s One Child Policy as the Keynote Speaker and Award of Excellence recipient at the 100th Anniversary of International Women’s Day celebration in Boston on March 8, 2011.  Below are her remarks. 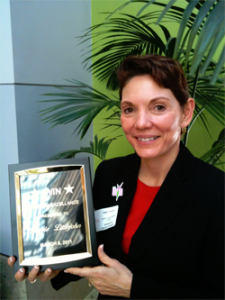 I am deeply humbled to receive the Award of Excellence on this historic day, and I applaud the Women’s Information Network for its vision and courage in highlighting the biggest women’s rights issue in the world today:  the coercive enforcement of China’s One Child Policy.  I accept this award on behalf of the women and families who continue to suffer because of forced abortion, forced sterilization and infanticide.  In accepting this award I acknowledge Congressman Chris Smith, and his wife Marie, who have gone before me as true heroes tirelessly advocating against forced abortion in China for decades.  I also acknowledge Bob Fu, Mark Shan and Brother George of the China Aid Association, who have worked shoulder to shoulder with me in the delicate and difficult effort to document coercive family planning in China.  I acknowledge the anonymous sources within China who have risked their safety to leak to the West the brutal truth about coercive population control at the hands of the Chinese Communist Party.

Today marks the 100th Anniversary of International Women’s Day.  Think of how far we’ve come in the past 100 years.  Women of the 20th century have been true trail-blazers, shattering almost every glass ceiling that loomed above our foremothers of 100 years ago. Marie Curie became pre-eminent in the sciences, winning not just one, but two Nobel Prizes.  Amelia Earhart was a pioneer in aviation, the first woman to fly solo across the Atlantic Ocean.  We have seen the rise of great women humanitarians, such as First Lady Eleanor Roosevelt, drafter of the Universal Declaration of Human Rights, and Mother Teresa.  And we have seen several powerful Prime Ministers:  Golda Meir of Israel, Indira Gandhi of India, and Margaret Thatcher of the UK.  It is only a matter of time before we see a woman President of the United States.

While women in some areas of the world celebrate the great advances in women’s rights in our nations, women in other areas have seen a decline.  As the president of Women’s Rights Without Frontiers, I am dedicated to the plight of more than half a billion women in China who are victims of the One Child Policy.  They have had perhaps their most fundamental right stripped away:  the right to bear children.  And let us not forget the 100 million missing women who are victims of “gendercide,” the sex-selective abortion of baby girls.

Most people know that China has a One Child Policy.  Very few people stop to think about how it’s enforced – through forced abortion, forced sterilization and infanticide.

The coercive enforcement of China’s One Child Policy causes more violence against women and girls than any other official policy on earth.  It is the biggest women’s rights issue in the world today.  It does not matter whether you are pro-life or pro-choice on this issue.  No one supports forced abortion, because it is not a choice.

First, forced abortion is violent.  Women are literally dragged out of their homes.  These forced abortions can happen up the ninth month of pregnancy.  Sometimes the women themselves die during late term forced abortions.  [Note:  to view a four-minute video, “Stop Forced Abortion in China!” click here. http://www.youtube.com/watch?v=JjtuBcJUsjY]

Second, forced sterilization is also violent and can lead to life-long health complications.

Third, regarding infanticide, I point you to a document I submitted into the Congressional Record, called “Best Practices – Infanticide.”  It’s a web-based discussion copied from the official website for Chinese obstetricians and gynecologists about how best to kill infants being born alive during induced labor forced abortion.  [Note:  To read this document and other expert reports, click here. http://www.womensrightswithoutfrontiers.org/index.php?nav=congressional]

Fourth, because of the traditional preference for boys, girls are selectively aborted, resulting in the snuffing out of little female lives.  It is estimated that there are 100 million women and girls missing in the world today due to sex selective abortion.  This is called gendercide, the sex-selective abortion of baby girls.

Fifth, because of this gendercide, there are an estimate 37 million more men than women living in China today  — 37 million frustrated men who will never marry because their future wives were sex-selected for abortion before they were born.  This gender imbalance is in turn the driving force behind human trafficking and sexual slavery, not only within China but also the surrounding countries, including North Korea, Vietnam, Burma, Mongolia and Thailand.

Sixth, China has the highest female suicide rate in the world.  According to the World Health Organization, 500 women end their lives every day in China.  I don’t think that the despair that leads to suicide is unrelated to the coercive enforcement of the One Child Policy.

Not only are the women themselves persecuted, but those who stand up for them are persecuted as well.  Blind activist Chen Guangcheng is a hero in China, because he has had the courage to stand up against the hated One Child Policy.  Chen exposed the fact that there were 130,000 forced abortions and sterilizations in Linyi County in 2005.  For this he was jailed for four years and three months, tortured, and denied medical treatment.  Last month a video featuring Chen Guangcheng was leaked to the West.  Chen and his wife, Yuan Weijing, were “beaten senseless” in retaliation for the release of the video.  They were denied medical treatment.  Women’s Rights Without Frontiers calls for the immediate, unconditional release from house arrest of Chen Guangcheng and his family, and for urgent medical treatment. [Note:  to sign a petition to Free Chen Guangcheng, click here: http://www.womensrightswithoutfrontiers.org/index.php?nav=chen-guangcheng]

Those in China cannot criticize the One Child Policy without putting themselves and their families at risk.  As an American, I have free speech.  Because I can speak out, I feel the moral obligation to do so.

How does forced abortion in China affect us as Americans?  In two ways:

First, CNN’s Ted Turner has repeatedly called for the whole world, including the United States, to adopt the One Child Policy, most recently at the Cancun Climate Conference in December 2010.  Turner says that its enforcement is not coercive.  This statement is demonstrably false.  Adopting the One Child Policy worldwide would hurl women’s rights back to the dark ages.

People often ask me how I became involved with this issue.  For years I was a litigation attorney and represented large companies in their intellectual property or commercial lawsuits.  In the mid-nineties I represented a Chinese refugee in her case for political asylum.  She had been forcibly sterilized — dragged out of her home screaming and pleading, strapped down to a table, and sterilized without anesthesia.  The surgical instruments were not sanitary, so she suffered from a massive infection that left her with chronic back pain, abdominal pain and migraines, destroying her health.  It was through this dear woman that I discovered the horrifying reality behind the One Child Policy.

In 2003 and for several years afterwards, I faced my own personal health crisis.  During mastectomy surgery, I became infected with a highly drug-resistant MRSA staph infection.  Overnight I went from being a big firm lawyer to lying flat on my back, completely disabled, and crying out to God to spare my life.  As I faced my own mortality, my heart went out to those who were worse off than I was, especially women like my former client who were undergoing forced abortion or forced sterilization at that moment.  Facing death, I wanted my life to make a difference for them.  I believe I was restored to complete health by a divine hand and given a mission that sets my heart on fire:  to end forced abortion and sexual slavery in China.  Doors have swung open to me as I embraced this mission.

Every woman here has her own story, and no one on earth is immune from suffering.  May our pain make us more compassionate towards the needs of others, especially those in even greater pain.  Perhaps you have already found an issue that sets your heart on fire and you have dedicated your life to making a difference for others.  If so, I wish you all the best.

But perhaps you haven’t yet.  Do you want your life to have more meaning and purpose?  Do you want to have an impact?  Women in the United States and all over the world need your help.  In the US, we have an urgent problem with human trafficking and sexual slavery.  There are many excellent organizations that address this issue.  Donate money to them, or volunteer for them.  Get involved!  If you want to help fight forced abortion in China, please let me know — I’d love to work with you.  It’s amazing how much power there is in simply putting the link to an organization on your Facebook page or tweeting about it.  You can start by signing the petition to free Chen Guangcheng. http://www.womensrightswithoutfrontiers.org/index.php?nav=chen-guangcheng

There are women all over the world who desperately need our help – victims of female genital mutilation, bride burning, stoning, honor killing, forced abortion, forced sterilization, gendercide, sexual slavery.  These practices must be stopped, and stopping them is no small challenge.  We need the full commitment of every person who is able to help.  Think of the issue that breaks your heart.  Resolve to take the first step towards helping women who need you today – the 100th Anniversary of International Women’s Day.  A journey of 1000 miles begins with a single step. Remember, women are not free until all women are free.