Posted on October 3, 2017 by Reggie Littlejohn 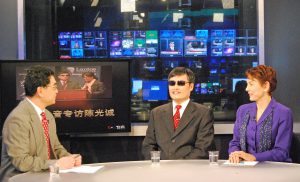 VOA TV’s Huchen Zhang interviews Chen Guangcheng for the first time on U.S. soil, with Reggie Littlejohn, in 2013. Zhang is among the “Mandarin Five” currently on forced administrative leave.

To Whom It May Concern:

We have learned that the Office of Inspector General of the United States Department of State has decided to start an investigation of “management decisions” giving rise to the Guo Wengui interview incident at Voice of America. We applaud the OIG’s decision to investigate the VOA Management and have some suggestions regarding the investigation.

For those unfamiliar with the Guo Wengui interview incident, on April 19 of this year, Voice of America China Branch was set to broadcast a three-hour live interview of Guo Wengui, a Chinese billionaire with close ties to the Chinese State Security apparatus, who claimed to have information about high-level official corruption in the Chinese regime.  Specifically, Guo stated his intent publicly to expose how China’s State Security apparatus pressured the Chinese business community into financing its infiltration into organizations globally, as well as its monitoring of Chinese citizens.

This exposure of widespread official corruption had the potential to afford a rare revelation of the machinations of the police state to those who are its innocent victims. VOA promoted the upcoming interview heavily for a week, with the full knowledge and consent of VOA management.

Instead, VOA’s upper-level management abruptly cut short the interview mid-broadcast, to the consternation of the Chinese audience, many of whom stated that they believe that VOA was kowtowing to censorship and pressure from the Chinese Communist Party.   VOA has since suffered a sharp loss of its viewership and reputation in China, and has indeed become the object of mockery.

Equally disturbing, five journalists involved in the interview were put on administrative leave pending “investigation.”  Five months later, four remain on involuntary leave.  Has the investigation of the “Mandarin Five” been concluded?  If so, why has no report been issued?

In an Orwellian twist, a VOA Mandarin TV host happened to wear a white flower on her show shortly after the aborted interview with Guo.  According to the BBG Watch website, Human Resources at VOA attempted to pressure this host and several others into admitting that the wearing of the white flower symbolized the “death of VOA.”  Predictably, the effect of this interrogation was the intimidation of VOA staff.

Why did the VOA Management turn seemingly overnight from supporting the Guo interview to trying to shut it down?

VOA Management has argued that they were simply upholding journalistic standards of “verification, balance and fairness.”   However, former VOA Director Robert R. Reilly has defended the journalistic practices of the Mandarin Five and criticized the investigation against them, stating, “In my 11 years of experience at VOA, I am unaware of anything like this having happened before.”

According to reports and information provided to us, the Chinese Communist regime took several extraordinary actions during the days leading up to the interview.  For example, two days before the scheduled interview, officials from the Chinese Ministry of Foreign Affairs summoned VOA’s Beijing correspondent to pressure VOA to cancel the interview.   Officials then issued a warrant for the arrest of Guo.  After this, the Chinese Communist Party issued a notice alerting Interpol of the Chinese regime’s arrest warrant for Guo.  Having done this, they then accused Guo of being a fugitive criminal.  The day before the interview, the Chinese Embassy in Washington, D.C. called the VOA Mandarin Service and demanded cancellation of the Guo interview.

Could it be that VOA Management did indeed cave to pressure from the Chinese government?  If so, why would VOA Management be vulnerable to such pressure?

Could reports be true that some members of VOA management and the Broadcasting Board of Governors (BBG, VOA’s parent federal agency) have significant business interests in China?

If such ties do exist, they would of course make members of VOA Management and the BBG vulnerable to pressure from the Chinese Communist Party.

In our opinion, maintaining financial ties to the repressive regime whose abuses you are charged with exposing presents an inevitable conflict of interest.

1)   Did VOA Management cave to pressure from the Chinese regime to cut short the interview exposing official corruption?

2)   Do members of VOA Management and the BBG, or their family members, maintain financial ties to China?  What are these business relationships?

The Chinese Communist Party has spent a lot of money to cut off any information from the outside, including using lobbying and other pressure to influence media from the outside to limit their coverage of issues in China which the CCP views as sensitive. Despite the CCP’s ability to limit Internet usage, short wave remains a powerful tool, precisely because it is out of the control of the CCP censorship system.

After 70 years, the BBC ended its vital shortwave radio broadcasts in Mandarin in 2011, as did Deutsche Welle in 2013. Other international shortwave services have followed suit, severely reducing or eliminating their shortwave services. VOA and Radio Free Asia stand alone in their extensive shortwave radio capacities to reach Chinese people hungry for global news unfiltered by official Communist news sources.

Again, we applaud the OIG’s decision to conduct an investigation. We look forward to the results of this investigation, which we believe will include a complete vindication of the VOA Mandarin Five.