Posted on August 4, 2014 by Reggie Littlejohn 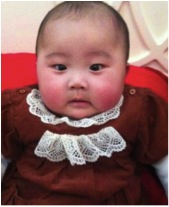 Li Meng, rescued from abortion and abandonment by our “Save a Girl” Campaign.

Look at beautiful baby Li Ming! (Her name has been changed to protect her identity.) Isn’t she as cute as a button?

Her grandmother doesn’t think so, and she did everything she could to force her mother to abort her. But Li Ming’s mother cried out for help and was amazed to find it — not from her own family, but from people like you.

When Li Ming’s mother met her father, they wanted to marry. But his mother did not approve of the match. Why? Because Li Ming’s mother appeared “too thin and unhealthy.” According to Chinese superstition, only a robust woman can give birth to a boy. When Li Ming’s mother did conceive and the child was found to be a girl, Li Ming’s grandmother tried to force her mother to abort her. Li Ming’s grandmother cast blame on her poor mother, saying it was her “fault” that the baby would be a girl. Traditionally, raising a girl in China is a sign of shame for a family, for one day she will grow up, marry a husband, and become joined to his family. Girls are seen as a waste of time and money, only something to be acquired later on in life.

Once Li Ming was born, her grandmother tried to force Li Ming’s mother to abandon her. Li Ming’s mother began to cry out in anguish and did not know where to turn or what to do. Thankfully, one of Women’s Rights Without Frontiers’ (WRWF) undercover fieldworkers found Li Ming’s mother before it was too late. The fieldworker told this mother about our “Save a Girl” program. Our fieldworker told her that we are helping families keep their girls because we believe that girls matter just as much as boys. Through the aid of one year of WRWF monthly stipends, Li Ming’s’s mother is defying the criticisms and pressures from her mother-in-law. She proudly gave birth and is raising her little girl!

Our “Save a Girl” program saved Li Ming’s life. Her mother was surprised to get help from us. She said that even though Li Ming’s own grandmother did not like her, “strangers are loving my daughter unconditionally.” Strangers, like you, are saving baby girls and changing the culture, one family at a time.

This Chinese Valentine’s Day, will you show love for a girl child and become a GirlSaver? Any donation is welcome, including a one-time donation. But would you consider becoming a monthly donor, a “GirlSaver?” For only $25 per month or $300 per year, our GirlSavers have helped WRWF save at-risk babies in China, babies like Li Ming, who might not be alive if one of our undercover fieldworkers had not met her mother and assured her that little girls are just as special as boys. Because of your generosity, we can continue to save girls in China.

Learn more about our Save a Girl Campaign: