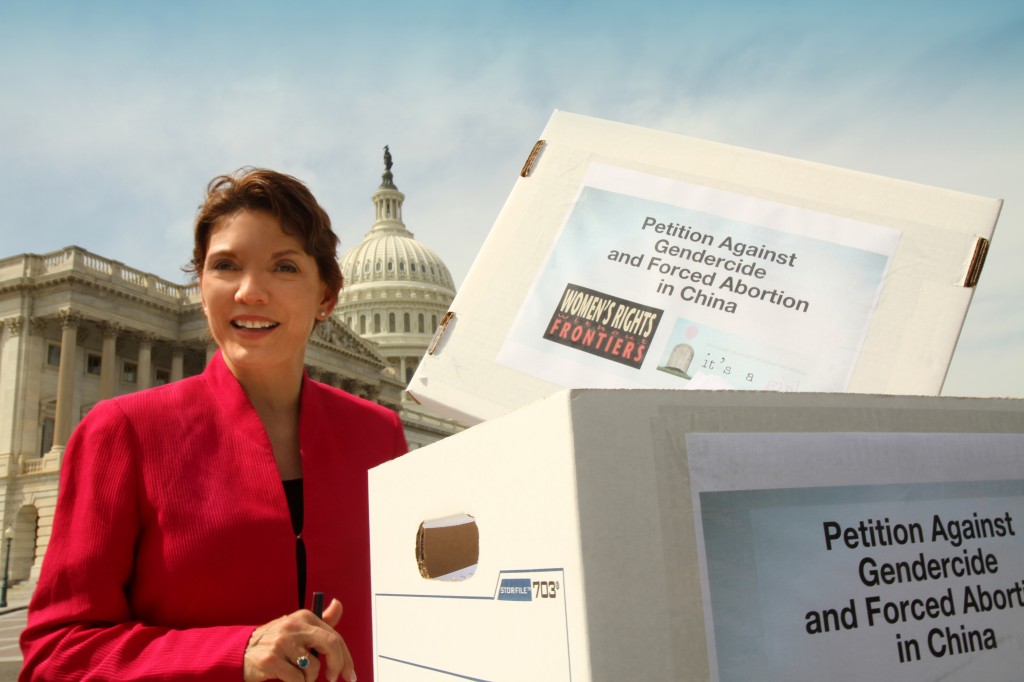 Reggie Littlejohn at a press conference in front of the U.S. Capitol, before attempting to deliver 200,000 signatures from 70 countries calling for an end to forced abortion and gendercide in China.

Exposing the atrocities of forced abortion and gendercide in China, Reggie Littlejohn was the keynote speaker for the closing banquet of the National Right to Life Convention in Dallas on Saturday, June 29.  Other speakers at the Convention included Senator Ted Cruz and Governor Rick Perry.  Below is the text of her remarks.

Forced Abortion and Genercide:  China’s War Against Women
Could a One-Child Policy Ever Come to the U.S.?

I want to thank the National Right to Life leadership for choosing forced abortion and gendercide in China as the subject for their Keynote Address. These are tough subjects, but they are among the great issues facing our age — not just in China, but the world over.  It is an honor to speak to you this evening.

You may have heard reports that China is ending its One-Child Policy.  This is untrue.  As recently as January 14, 2013,  Wang Xia, Chairman of the National Population and Family planning Commission, stated, “We must unwaveringly adhere to the One Child Policy as a national policy to stabilize the low birth rate as the primary task.”  China’s One Child Policy is here to stay.

And you may think that this is only a Chinese problem.  If you think that a One Child Policy could never be implemented in the U.S., think again.

Ted Turner has repeatedly stated that he thinks that the United States should adopt a “voluntary” One Child Policy.  There is no such thing.

In 2011, a former Planned Parenthood Executive wrote that, unless the U.S. enacts the Obama administration’s health care plan and China’s One Child Policy, “the world is doomed to strangle among the coils of pitiless exponential growth.”

Just this past week it was reported that a 2010 candidate for governor of Florida has stated that he thinks that the world should implement the use of “birth licenses” or “birth credits” that would cost money after one child.  He does not specify what would happen to a woman who became pregnant without a “birth license” and could not or would not pay for a “birth license.”   Would she be forcibly aborted?

I am here to show you what the One Child Policy looks like, so that this scourge on humanity will end in China and will not metastasize to other countries.

The magnitude of suffering is almost unimaginable.  Since the Roe v. Wade decision in 1973, the U.S. has had about 55 million abortions.  Since the One-Child Policy was instituted in 1980, the Chinese Communist Party boasts that it has “prevented” 400 million births.  That’s more than the entire population of the United States and Canada combined.

Many of these births are “prevented” through forced abortion.  Family Planning Police drag women out of their homes and force them to abort their babies, up to the ninth month of pregnancy.  Watch our four-minute video:

Gendercide.  Because of the traditional preference for boys, girls are targeted for abortion, just because they are girls.  Boys are the ones who work the fields, carry on the family name, and support parents in old age.  There’s a saying in China, “Raising a daughter is like watering someone else’s garden.”  Because of son preference, according to one UN estimate, up to 200 million women are missing in the world today because of sex-selective abortion.   This is the focus of the “It’s a Girl” film, the authoritative documentary on forced abortion and gendercide in India and China.  The filmmakers and I have screened this powerful film at the British Parliament, European Parliament and in the United States Capitol Visitors’ Center Auditorium.

In China, there are 37 million more men living than women.  This is driving human trafficking and sexual slavery, not only in China but from the surrounding nations as well:  According to the most recent State Department’s Trafficking in Person’s report, “women and children from neighboring countries including Burma, Vietnam, Laos, Mongolia, Russia, and North Korea, and from locations as far as Romania and Zimbabwe are reportedly trafficked to China for commercial sexual exploitation and forced labor.”

China’s One Child Policy causes more violence against women and girls than any other official policy on earth, and any other official policy in the history of the world, because of the sheer numbers involved.  One woman out of every five on earth is Chinese.  Forced abortion.  Forced sterilization.  Infanticide.  Gendercide.  Human trafficking and sexual slavery.  How do Chinese women deal with all this violence?  The answer is sobering.  China has the highest female suicide rate in the world.  According to the World Health Organization, 590 women a day end their lives in China.  This is the real “war against women.”

Together, the “It’s a Girl” team and Women’s Rights Without Frontiers have gathered more than 200,000 signatures from more than 70 countries on petitions against gendercide and forced abortion in China.  In April, Congressman Chris Smith and I tried to deliver these to the Chinese Embassy in DC.  The Embassy would not open its doors to receive them.  The Chinese Communist Party shut us out of their embassy, but they cannot stop the voices of 200,000 people from all over the world demanding an end to these atrocities against women and girls.

Women’s Rights Without Frontiers has been called the leading voice to expose and oppose forced abortion in China.

We have testified six times at the U.S. Congress and have spoken multiple times at the European, British, Irish and Canadian Parliaments as well, telling decision makers all over the world about the suffering of women and girls in China. 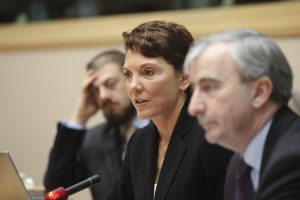 Reggie Littlejohn at the European Parliament, seated next to MEP Gay Mitchell.

European Parliament. We were delighted when, in a striking blow against China’s One Child Policy, the European Parliament in July 2012 passed a resolution strongly condemning forced abortion and involuntary sterilization in China and globally.  The Parliament cited the case of Feng Jianmei, who was forcibly aborted at seven months.  Women’s Rights Without Frontiers broke that case to the west. Specifically, the European Parliament’s resolution “strongly condemns the decision to force Ms. Feng to have an abortion and condemns the practice of forced abortions and sterilizations globally, especially in the context of the one-child policy.”  The resolution further states that “the EU has provided, and still provides, funds for organizations involved in family planning policies in China,” and “urges the Commission to ensure that its funding of projects does not breach” the European Parliament’s commitment against coercive population control.

The European Parliament has been funding the UNFPA and International Planned Parenthood, both of which have been working hand in hand with the Chinese Communist population control machine for decades.  The United States funds these organizations as well.  Former Secretary of State Colin Powell found UNFPA to be complicit with coercive family planning in China, and the Bush administration cut off funding.  The Obama administration has restored this funding.

United Nations. In March 2013, United Nations Commission on the Status of Women held a global conference in the topic, “Elimination and prevention of all forms of violence against women and girls.”  We presented four times at the UNCSW, showing the “It’s a Girl” documentary, and arguing that forced abortion and gendercide are the most massive causes of violence against women in the world today, because of the number involved.

The United Nations listened and, while we may not agree with all aspects of their report, we are delighted that it includes a statement urging governments, relevant entities of the United Nations system and human rights organizations to “condemn and take action to prevent violence against women and girls in healthcare settings, including . . . forced sterilization, forced abortion, and forced use of contraceptives . . .” All of these forced medical procedures are practiced in the coercive implementation of China’s One Child Policy.

Saving Lives in China:  Our “Save a Girl” Campaign

WRWF gives support to mothers who are at risk of aborting or abandoning their baby girls.  This money helps mothers feed and care for their daughters, and resist pressure to abort or abandon them.  We ask people to donate $25 per month.

Save a Girl Campaign Webpage
http://womensrightswithoutfrontiers.org/index.php?nav=end-gendercide-and-forced-abortion 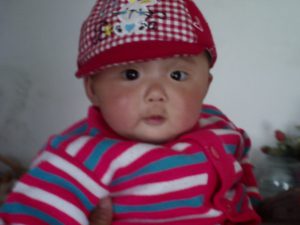 This baby girl from rural China was saved from abandonment by WRWF’s “Save a Girl” Campaign.

For example, one of our baby girls was born to poor farmers.  Her father wanted a son and was pressuring his wife to leave the baby out in the field to die.  A WRWF Field Worker contacted the mother, who said that if we would help her, she would keep the girl.  WRWF began giving her monthly support.  Her daughter has become an adorable girl and is now greatly loved by both her parents.  Her mother told WRWF: “You saved my daughter’s life.  Thanks to you and your organization.”

WRWF also gives monthly support for a year to women who are pregnant without a birth permit and are hiding or running to escape forced abortions.  For example, one of our mothers was moving from village to village, hiding from the family planning police.  WRWF helped her with monthly support, and she recently gave birth to a healthy baby boy.   We also give monthly support to families that are so desperately poor that their daughters are at risk.

Sign the petition, share our videos, support the “Save a Girl” campaign.  Together we can send forced abortion and gendercide to the dungheap of history, where they belong.

Sign our petition against forced abortion in China:
http://womensrightswithoutfrontiers.org/index.php?nav=sign_our_petition