Posted on December 20, 2016 by Reggie Littlejohn 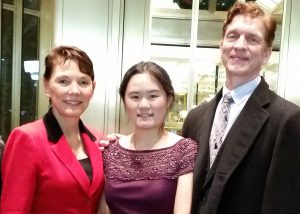 NEW YORK:  On Sunday, 13-year-old Anni Zhang, rescued from China,  was living a dream come true – she performed piano in Carnegie Hall.  What should have been a completely joyous occasion, however was marred.  Her father, veteran activist Zhang Lin, was not able to attend because the Chinese government refused to issue him a passport.

Reggie Littlejohn, president of Women’s Rights Without Frontiers, played a key role in bringing Anni to the United States from China, where she and her father were under house arrest after she had been detained and denied the right to go to school.  Littlejohn and her husband, Robert, have been raising Anni as their own daughter. They flew the family, including Anni’s older sister Ruli, from San Jose, CA to New York to celebrate Anni’s achievement with her. 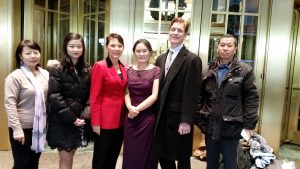 Littlejohn stated, “My husband and I are so proud of Anni.  She came to the United States without playing an instrument, and after just two years, she won an international competition to perform at Carnegie Hall.  That’s got to be some kind of a record.  I think she’s a genius!  She looked gorgeous in her purple sequined concert gown, and she played brilliantly.  But as my heart was bursting with pride for her, it was also aching for her father, who could not be here to enjoy this important moment with his daughter.”

Littlejohn continued, “I spoke with Zhang Lin.  He told me that he has applied several times for a passport, telling the authorities that he needed one quickly so that he could come to New York and see Anni perform.  Each time, they refused him a passport.  They once told him it is because of his ‘history.’  What could this statement mean, other than that they are punishing him for his ‘history’ of pro-democracy activism?    What kind of an inhumane government is this, that would detain a 10-year-old to punish her father, and then would refuse a passport to the father to punish them both?”

Activist Chen Guangcheng issued the following warning to the Chinese government:  “Controlling people’s right to freedom of movement is a hallmark of authoritarian regimes.  To the Chinese Communist Party: If you want to be recognized as legitimate in the international community, you need to respect the basic rights of citizens.”

Jing Zhang, president of Women’s Rights in China and colleague of Zhang Lin, also played a major role in bringing Anni to the United States.  She stated:  “The Chinese Communist Party’s persecution of pro-democracy activists is unprecedented.  Recently family members of activist Peng Ming, who was serving his sentence, received horrible news.  Hubei Prison officials claimed that Peng Ming died suddenly of a heart attack. But then Peng Ming’s heart and brain were secretly removed, without permission from his family.  Many dissidents and even petitioners seeking justice are imprisoned.  The CCP has become desperate.  At this time, they will make life more difficult for Zhang Lin.”

Anni said, “Performing at Carnegie Hall was one of the most wonderful moments of my life.  I only wish my father could have been there to share it with me.”

Anni is known as “China’s youngest prisoner of conscience.”  When she was ten, Anni was kidnapped out of her elementary school, detained overnight, denied the right to go to school and put under house arrest with her father.  Learn more about her story here.