Posted on October 17, 2014 by Reggie Littlejohn 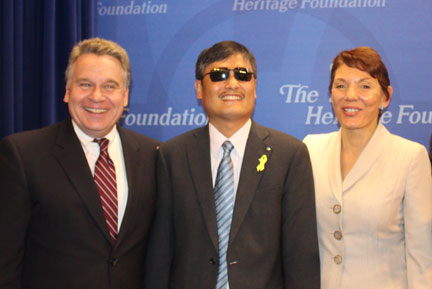 WASHINGTON, D.C.  In commemoration of the International Day of the Girl Child, The Heritage Foundation partnered with Women’s Rights Without Frontiers in co-hosting a powerful event to expose the truth of China’s One Child Policy. Representative Chris Smith, blind activist Chen Guangcheng, and Women’s Rights Without Frontiers President Reggie Littlejohn joined forces to expose the atrocities of forced abortion and gendercide in China. 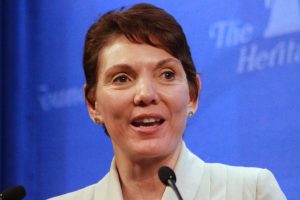 Littlejohn shared harrowing statistics: the Chinese Communist Party boasts that it has “prevented” 400 million lives through its brutal One-Child Policy, a number greater than the entire population of the United States and Canada combined. Littlejohn stated, “each one of these 400 million lives ‘prevented’ is a victim of communism. This is the hallmark of communist regimes:  the peace-time killing of their own citizens.” Littlejohn drew the connection between forced abortion and gendercide, explaining that son-preference combined with low birth rate requirements have resulted in the sex-selective abortion of girls leading to a rise in sex-trafficking, the highest female suicide rate in the world, increased incidence in breast cancer, and a growing “senior tsunami” with no young population to sustain it. In Littlejohn’s words, “China’s One-Child Policy causes more violence against women and girls than any other official policy on earth and any other official policy in the history of the world. This is the true ‘War on Women.’”

Littlejohn concluded on a note of hope, informing the audience of how they could make a difference – one daughter, one family at a time, through Women’s Rights Without Frontier’s“Save A Girl” campaign. 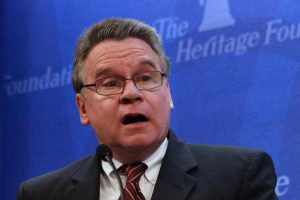 Seventeen-term Congressman Smith keynoted the event, stating that “forced abortion is state-sponsored violence against women and children.” He explained that women in China are “mocked, belittled, humiliated and exploited” to the extent to which a mother “cannot protect her unborn baby nor herself” at the violent hands of a repressive government, which seeks to control its people through a system of birth permits and forced abortions. Congressman Smith has been a tireless proponent of Chinese human rights issues, chairing more than 50 Congressional hearings on the matter.  Four of these were dedicated to the plight of Chen Guangcheng when he was detained, under house arrest, or languishing in a hospital in Beijing after his dramatic escape. Of Chen – the blind, self-taught lawyer who bravely exposed the more than 100,000 forced abortions and sterilizations in his hometown of Linyi – Congressman

Smith said “I know of no other person on earth who has personally suffered so much for attempting to stop this cruelty to women.” Indeed, Chen and his extended family have paid the price of intimidation, detention, torture and terror. 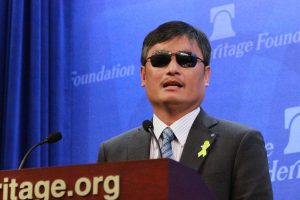 Chen received a hero’s welcome by the audience.  He stated that the One Child Policy “has demoralized Chinese society, changing it from a society that highly values life to a social decay where society looks down on and has contempt for the individual lives of human beings.” Chen related the account of one couple from a neighboring village.  The wife was found to be pregnant without a birth permit. Because the pregnancy was “illegal,” the couple was forced to abort, but they resisted when authorities came to drag the wife to the clinic. The husband and wife were thrust onto a truck.  The husband was taken off the truck and beaten on the ground. After the wife’s pregnancy was aborted against her will, the couple was in agony with no one to help them. Other couples, too frightened to stay in their homes, flee to sleep in the fields, in an effort to keep the children they so desperately want. Chen likened the environment to a “war zone,” and insisted that “everyone needs to know that the Communist Party does not represent China and especially not the Chinese people.”  Rather, “they have become a public enemy of the Chinese people.”  Chen concluded by explaining that in China they have a saying: “Your home is your castle, and even a king will not be allowed to come in without the owner’s permission.  But now in today’s China, under the Communist rule, the government can put their hand into your body, grab your baby out of your womb, and kill your baby in your face.” Chen concluded:  “In such a situation, we, people of conscience, must stand up with the Chinese people to end the Communist rule in China.”

View a video of the full event: http://www.heritage.org/events/2014/10/one-child-policy

Learn more about the “Save a Girl” Campaign to save girls from gendercide in China: http://womensrightswithoutfrontiers.org/index.php?nav=end-gendercide-and-forced-abortion