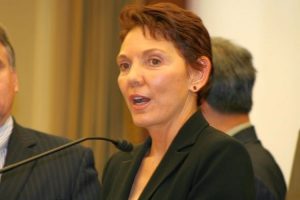 Women’s Rights Without Frontiers president, Reggie Littlejohn, will be a keynote speaker of the Walk for Life, West Coast. 50,000 people are expected to march at noon on January 21 in San Francisco.

Littlejohn stated, “It is a great honor to be given the opportunity to speak in this powerful venue on behalf of the women and babies of China. I thank Eva Muntean and the other organizers of the Walk for embracing international issues. Something few people realize is that the Chinese Communist Party boasts that it has “prevented” 400 million lives through its brutal One Child Policy. That’s greater than the entire populations of the United States and Canada combined. And too many of these lives were “prevented” by forced abortion. Millions of girls have been selectively aborted and abandoned as well. These issues continue under the Two-Child Policy as well. The greatest hemorrhage of human life in the world is flowing out of China today.”
Littlejohn will be joined by fellow keynote speakers Pam Tebow, mother of Heisman Trophy winner, Tim Tebow, Melissa Ohden, survivor of a failed saline abortion, and Rev. Childress, founder of Black Genocide.org.
Rain or shine, please join Reggie and 50,000 others at the Walk for Life West Coast 2017!
This entry was posted in China's One Child Policy, coerced abortion, Forced Abortion, gendercide, One Child Policy, pro-life, Reggie Littlejohn, Uncategorized, Walk for Life West Coast. Bookmark the permalink.