Littlejohn to United Nations: Forced Abortion Is Not the Answer to Climate Change 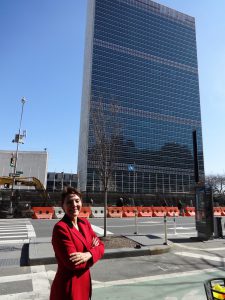 Reggie Littlejohn at the United Nations

The theme for UNCSW 2016 is “Women’s empowerment and the link to sustainable development.” Regarding “sustainable development,” at the U.N. Climate Conference in Copenhagen in December of 2009, a senior official responsible for the coercive population control famously stated that the One Child Policy was successful in reducing carbon emissions blamed for global warming.

“China has managed to bring down its birth rate with the family planning policy in the past 30 years, which results in less population and less carbon dioxide emission . . . Such a decline in population growth converts into a reduction of 1.83 billion tons of carbon dioxide emission in China per annum at present. . . . The policy on family planning proves to be a great success. It not only contributes to reduction of global emission, but also provides experiences for other countries, developing countries in particular, in their pursuit for a coordinated and sustainable development.”

China has touted the elimination of 400 million lives under the coercive One Child Policy as an effective means to combat climate change. They have also set their population control program out as a successful example for developing nations to follow.

What the Chinese government has not mentioned is the fact that too many of these lives were prevented through forced abortion and involuntary sterilization.

Forced abortion is not a choice. It is official government rape.

To understand the brutal truth behind forced abortion in China, watch:

These atrocities continue to this day. China’s new Two-Child Policy will not end forced abortion, forced sterilization or other forms of coercion. Unmarried women and third children will still be forcibly aborted.

The only way to end forced abortion under the One Child Policy is to end coercive population control entirely.

The UNCSW this year is reviewing the 2013 theme, “the prevention of violence against women and girls.” Forced abortion and gendercide under China’s One Child Policy will continue under the two-child policy. Since the UNCSW has stated through its 2013 “Agreed Conclusions” that coercive population control should end, WRWF calls upon the U.N. to take effective action to end it.

More often than not, gendercide is not a choice either. There is a strong correlation between sex-selective abortion and coercion. Crushing social, economic, political and personal pressures in cultures with a strong son preference trample women pregnant with girls. All too often, women in these cultures do not “select” their daughters for abortion. They are forced.

For most of us, “it’s a girl” is cause for enormous joy, happiness and celebration. But in many countries, this phrase can be a death sentence. In fact, the words, “it’s a girl” are the deadliest words on earth when said at the birth of a child. According to one U.N. estimate, up to 200 million women are missing in the world today due to “gendercide,” the selective abortion, abandonment or deadly neglect of baby girls just because they are female.

This is not a political issue. This is a human rights issue that must be approached as an area of common ground. No one supports the systematic elimination of women and girls.

Sons traditionally carry on the family name, work the fields, and take care of their parents in old age. A daughter joins her husband’s family at marriage. There is a saying: “Raising a girl is like watering someone else’s garden.” The One Child Policy exacerbates the underlying son preference. When couples are restricted to one child, women often become the focus of intense pressure by their husband and in-laws to ensure a boy.

Systematic, sex-selective abortion constitutes gendercide. Because of this gendercide, there are an estimated 37 million more males than females in China today. The presence of these “excess males” is the driving force behind human trafficking and sexual slavery, not only within China but from surrounding nations as well.

China has the highest female suicide rate of any country in the world. According to the 2013 U.S. State Department China Human Rights Report, the numbers of female suicides have risen sharply in the past several years, from 500 women per day to 590.

The One Child Policy is causing a “senior tsunami.” The population is aging rapidly, with no young population to sustain it. According to figures provided by political economist and demographer Nicholas Eberstadt, China’s working population peaked in 2013 at about 73% and is now beginning a steady decline to 67% in 2030. Meanwhile, the ratio of China’s population, ages 55-64 to its population ages 15 to 24, will increase from about 30% in 1990 to 140% in 2030.

Finally, a medical study from China has revealed an additional way in which women are victimized by the One-Child Policy: significantly increased risk of breast cancer.

A meta-analysis of the association between induced abortion and breast cancer risk among Chinese females, dated November 24, 2013, was published by NCBI, National Center for Biotechnology Information, branch of the NIH, National Institute of Health.
http://www.ncbi.nlm.nih.gov/pubmed/24272196

The study notes that historically, China has had low breast cancer rates when compared with Western nations, but “the incidence of breast cancer in China ha[s] increased at an alarming rate over the past two decades.” The study notes that this rise “was paralleled to the one-child-per-family policy.”
In our view, the strong association of abortion and breast cancer established by this study brings the women’s rights violations under the One Child Policy to a new level: a woman pregnant in China without a birth permit is subjected to both government imposed forced abortion, and also breast cancer as a result of it. Where abortion is forced, the subsequent development of breast cancer becomes a violation of women’s rights in itself. “China: One-Child Policy Linked to Breast Cancer – Study.” http://www.womensrightswithoutfrontiers.org/blog/?p=1428. 12/2/13

These problems are not confined to China and India. Female feticide happens in the United States and Canada in numbers significant enough to distort gender ratios. This is discrimination against women in its most violent form.

Fortunately, there is hope. Women’s Rights Without Frontiers has launched two campaigns. First is our international advocacy campaign, in which we document these atrocities and speak to governments about how we in the West are funding it through UNFPA and International Planned Parenthood. We have had some success: The European Parliament passed a Resolution and the United Nations Commission on the Status of Women in 2013 passed an “Agreed Conclusion” condemning forced abortion and state-run coercive population control.

Second, through our “Save a Girl” Campaign in rural China, we are stopping gendercide, one baby girl at a time. We have field workers in China who reach out to women who have had an ultrasound, learned that they are pregnant with a girl, and are planning to abort or abandon her. A field worker will visit that woman and say, “Don’t abort your baby just because she’s a girl. She’s a precious daughter. We will give you a monthly stipend for a year, to help you support her.”

The practical support we offer empowers these women to keep their daughters. By the time the girl is three months old, she’s laughing and smiling and the whole family is in love with her. They can’t imagine life without her and thank us for saving the life of their daughter. This is what gets me out of bed in the morning – knowing that there are babies in China who are alive today because of our efforts. It is astonishing how little money it takes to save someone’s life in China.

We are also living the mission every day, around our own kitchen table. With the help of Cong. Chris Smith and other brave souls in the United States and China, we were able to obtain safe passage from China to the United States for Anni and Ruli Zhang, the daughters of veteran pro-democracy activist Zhang Lin, who is currently serving a 3.5 year jail sentence for standing up for 10-year-old Anni’s right to go to school. My husband Robert and I have taken Anni and Ruli into our family and are raising them as our own daughters. Anni has won a piano competition and will play at Carnegie Hall in December!
Every struggling mother in China and India deserves help to keep her daughter. Every little girl deserves to see the light of day.

If you want to join us in this struggle, I would welcome your help. This is beyond David and Goliath. It’s an enormous, long-term battle, but together, we can end forced abortion and gendercide and sweep these atrocities into the dung-heap of history, where they belong.

Learn more about the “Save a Girl” campaign:
http://womensrightswithoutfrontiers.org/index.php?nav=end-gendercide-and-forced-abortion