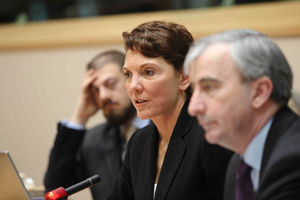 Reggie Littlejohn, President of Women’s Rights Without Frontiers and expert on China’s One Child Policy for the China Aid Association (Midland, Texas) and Human Rights Without Frontiers (Brussels, Belgium), spoke on the topic,  “Coerced Abortion in ‘Sexual and Reproductive Rights’ in China” at both the European Parliament in Brussels (March 22, 2011) and the British Parliament Palace at Westminster in London (March 23, 2011), at the invitation of the Dignitatis Humanae Institute and the All-Party Parliamentary Working Group on Human Dignity.

On March 8, 2011 the world marked the milestone of the 100th Anniversary of International Women’s Day. While we celebrate the great advance of women’s rights in many nations, women in other nations have seen a decline.  As the president of Women’s Rights Without Frontiers, I am dedicated to the plight of the 100 million missing women who are victims of “gendercide,” the sex-selective abortion of baby girls.  And let us not forget the women in China who are victims of the One Child Policy, which is enforced through forced abortion, forced sterilization and infanticide.  I have been asked to speak about China’s One Child Policy in the context of “Sexual and Reproductive Rights.”  The women of China have had perhaps their most fundamental sexual and reproductive right stripped away:  the right to bear children.

Most people know that China has a One Child Policy.  Very few people stop to think about how it’s enforced – through forced abortion, forced sterilization and infanticide.  The coercive enforcement of China’s One Child Policy causes more violence against women and girls than any other official policy on earth.  It is the largest women’s rights issue in the world today, affecting one out of every five women in the world.  Whether you are pro-life or pro-choice on this issue, no one supports forced abortion, because it is not a choice.

First, forced abortion is violent.  Women are literally dragged out of their homes.  These forced abortions can happen up the ninth month of pregnancy.  Sometimes the women themselves die.

This is picture of Liu Dan.  In 2009, she was 21 years old and 9 months pregnant when family planning police grabbed her out of her home, dragged her pleading and crying to the local family planning office, and forcibly aborted her full term baby.  They did this even though they already knew from medical tests that she had high blood pressure and that a forced late term abortion would be dangerous for her.  After the forced abortion, she lay alone and unconscious in an operating room in the family planning center.  Sensing something was wrong, her fiancé burst into the room at 3:00 a.m. to find her bleeding from the eyes, nose, ears and mouth.  Even so, the family planning police refused to call for emergency help, until her family insisted.  Help arrived too late.  Liu Dan died, along with her full term baby. 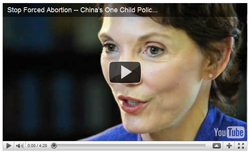 Forced sterilization is also violent and can lead to life-long health complications.

Regarding infanticide, read the chilling document called “Best Practices – Infanticide.”  It’s a web-based discussion copied from the official website for Chinese obstetricians and gynecologists about how best to kill infants being born alive during induced labor forced abortion.  [Note:  To read this document, click here.  http://www.womensrightswithoutfrontiers.org/index.php?nav=congressional.]

Because of the traditional preference for boys, girls are selectively aborted, resulting in the snuffing out of little female lives.  It is estimated that there are 100 million women and girls missing in the world today due to sex selective abortion.  This is called gendercide, the sex-selective abortion of baby girls.

Because of this gendercide, there are an estimate 37 million more men than women living in China today  — 37 million frustrated men who will never marry because their future wives were aborted before they were born.  This gender imbalance is in turn the driving force behind human trafficking and sexual slavery, not only within China but also the surrounding countries, including North Korea, Vietnam, Burma, Mongolia and Thailand.

China has the highest female suicide rate in the world.  According to the World Health Organization, 500 women end their lives every day in China.  I don’t think that the despair that leads to suicide is unrelated to the coercive enforcement of the One Child Policy.

Not only are the women themselves persecuted, but those who stand up for them are persecuted as well.  Blind activist Chen Guangcheng is a national hero in China, because he has had the courage to stand up against the hated One Child Policy.  Chen exposed the fact that there were 130,000 forced abortions and sterilizations in Linyi County in 2005.  For this he was jailed for four years and three months, tortured, and denied medical treatment.  Last month a video featuring Chen Guangcheng was leaked to the West.  The next day Chen and his wife, Yuan Weijing, were “beaten senseless” in retaliation for the release of the video.  They were denied medical treatment.  Women’s Rights Without Frontiers calls for the immediate, unconditional release from house arrest of Chen Guangcheng and his family, and for urgent medical treatment.  Those in China cannot criticize the One Child Policy without putting themselves and their families at risk.  [Note: To sign a petition to Free Chen Guangcheng, click here: http://www.womensrightswithoutfrontiers.org/.]

In China, a woman’s body is not her own.  It belongs to the state.  A woman’s womb is the most intimate part of her body – physically, emotionally and spiritually. For the Chinese Communist Party to force its bloody hand right into a woman’s womb and crush the life inside her is a heinous crime against humanity.  It must be stopped. [Note:  To sign a petition to stop forced abortion in China, click here:  http://www.womensrightswithoutfrontiers.org/index.php?nav=sign_our_petition.]